Thousands of drug dealers and addicts across the Philippines are surrendering to police, as a mayor known for backing extrajudicial killings of criminals takes office today as the nation's 16th president.

In Bonuan Gueset, a coastal district in Dagupan city, 200km north of the capital Manila, over 500 confessed drug addicts turned themselves over to their village chief early this week and signed notes pledging to get themselves rehabilitated.

They fear for their lives, Mr Ricardo Mejia, the village chief, told The Philippine Daily Inquirer.

They have a good reason to be afraid: Mr Rodrigo Duterte.

Mr Duterte will be inaugurated today for a six-year term as Philippine President, ushering in a new government that has promised a brutal war on crime. 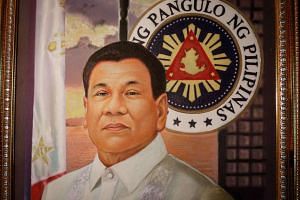 Philippines votes: Look back at our coverage here

Since Mr Duterte swept to victory in the May 9 elections, police and unnamed vigilantes have killed at least 54 suspected drug lords and dealers.

That works out to one killed a day, an escalation from the first four months of the year when the rate was about two a week, according to a Reuters report last week.

Fearful that they may also end up in body bags, some 300 peddlers and users of narcotics in an eastern suburb of metropolitan Manila and over 4,000 more in the vast southern region of Mindanao were reported to have surrendered to police this week.

Mr Duterte had warned addicts: "If I can't convince you to stop, I'll have you killed…"

The 71-year-old mayor of the southern city of Davao carved a menacing reputation as a tough-talking, gun-toting maverick who does not shy away from using means outside the law when dealing with criminals.

He has been accused of unleashing "death squads" in a bruising, two-decade war on crime in Davao, now regarded as one of the nation's safest cities. He has said his term would be "bloody".

Even before he was elected, he had already promised to send the bodies of tens of thousands of criminals to the bottom of Manila Bay.

In recent weeks, he has cheered on security forces with offers of a 3 million peso (S$86,000) bounty and a medal as the body count rose.

"I believe in retribution. Why? You should pay. When you kill someone, rape, you should die," he said on Monday.

Over 600 guests have been invited to Mr Duterte's inauguration at noon today at Malacanang Palace, the seat of political power here.

In a break with tradition, he has chosen not to have Vice-President-elect Leni Robredo at his inauguration. Mr Duterte has kept his distance from the 52-year-old widow out of a sense of gratitude towards his ally, former senator Ferdinand Marcos Jr. Ms Robredo, a close ally of outgoing President Benigno Aquino, beat Mr Marcos, 58, by a slim margin in the elections.

Mr Duterte had said he refused to give Ms Robredo a Cabinet post as he did not want to "hurt (Mr Marcos') feelings".