King said Russian media spread false claims that Ukraine had infected the Azov Sea with cholera and that British and Ukrainian secret services had tried to ship a nuclear bomb to Crimea.

Russia annexed Crimea in 2014, and last month its forces opened fire on three Ukrainian navy vessels and seized them as they tried to pass through the Kerch Strait from the Black Sea to the Sea of Azov.

"If any of you thought that that incident, as it were, came out of the blue, you would be wrong," King told a conference in Brussels organised by the German Marshall Fund think tank.

"The disinformation campaign began much earlier, more than a year ago, when Russian media started pushing claims that the authorities in Kiev were dredging the seabed in the Sea of Azov in preparation for a Nato fleet to take up residence," the British commissioner said.

"Then in the summer, there were claims that Ukraine had infected the sea with cholera," King said. "This was followed up in September with dark utterings in some Russian media forecasting west-inspired provocations on the Azov seashore."

King said Russian media was also reporting that the United States "has been planning for clashes between the Ukrainians and the Russian forces in the Black Sea since the 1990s". 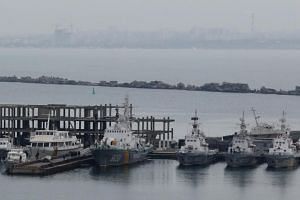 "Russian media reported that British and Ukrainian secret services have been trying to transport a nuclear bomb to the newly built bridge to occupied Crimea in order to blow it up," he added.

According to the EU commissioner, the Russian media then reported they "have been bravely prevented from doing so by special forces sent from Moscow."

"More bang for your fake news buck, I suppose."

He said the services of the European Commission, the bloc's executive arm, would expose the lies in the campaign, underlining a new push to bolster such services.

The EU last week announced a plan to increase from 1.9 million euros to five million euros next year the budget of the European Commission, the 28-nation bloc's executive, to tackle disinformation.

The EU at the same time launched a bloc-wide alert system and pressured internet giants like Facebook for more help.