MOSCOW (AFP) - Moscow slapped sanctions on Ankara on Friday (Nov 27) as the war of words over a downed Russian warplane escalated, with Turkish strongman Recep Tayyip Erdogan warning Russia not to "play with fire".

Russia announced it was halting a visa-free regime for Turkish visitors, after threatening a raft of retaliatory economic measures to punish the Nato member state. 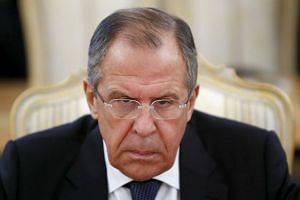 Russia to halt visa-free regime for Turks from Jan 1

Tuesday's incident has sent recriminations flying between two rival players in the Syrian war just as countries such as France are pushing for a broader coalition to try to defeat the Islamic State group.

"We advise Russia not to play with fire," Erdogan said in a speech in Ankara, lashing out at Russia's response to the downing as well as its support of the regime of Syrian President Bashar al-Assad.

Erdogan nevertheless said he wanted a direct meeting with Russian counterpart Vladimir Putin when the two leaders are in Paris next week for the UN climate summit.

But Moscow responded coolly, saying Turkey has yet to apologise for shooting down the jet on the Syrian border.

Turkey says the Su-24 warplane strayed into its airspace and ignored repeated warnings but Russia insisted it did not cross from Syria.

It is thought to be the first downing of a Russian plane by a Nato member in more than half a century.

One of the pilots was shot dead in Syria after parachuting out of the burning plane while the second was found safe and sound, but one Russian soldier was killed in a rescue operation.

Russian Foreign Minister Sergei Lavrov said Turkey had "crossed the line of what is acceptable" and warned the incident could severely undermine both its national and regional interests.

Moscow has ruled out any military response, but has pledged broad measures targeting entire sectors of the Turkish economy including tourism, agriculture and possibly key energy projects.

Lavrov said Turkish nationals would require visas from January 1, after Putin this week warned citizens not to travel to Turkey - a hugely popular destination for Russians.

"Russia is quite concerned with increasing terrorist threats in the Republic of Turkey," Lavrov added, after a spate of bloody attacks blamed on Islamic State extremists there.

Prime Minister Dmitry Medvedev on Thursday gave ministers two days to work out a plan to curb cooperation with Turkish companies after Russia said it would tighten checks on food imports over alleged safety standard violations.

Moscow has also hinted the reprisals could hit two major projects with Turkey - a planned gas pipeline and a nuclear power plant.

But they are on opposing sides in the Syrian conflict, with Ankara backing rebels fighting to topple Assad while Moscow is one of his last remaining allies.

Erdogan, whose ruling Justice and Development Party (AKP) won a landslide election victory earlier this month, said Turkey did not "deliberately" shoot down the plane.

He dismissed Putin's criticism of the incident as "unacceptable", noting that Russian planes had twice violated Turkish air space in October.

He also attacked the Kremlin's policy in Syria after it launched air strikes in September, saying it was backing the "murderer" Assad and not targeting IS jihadists.

Erdogan has already accused Putin of snubbing a phone call after the incident, but has refused to bow to Russian demands for an apology.

Putin's spokesman Dmitry Peskov told reporters the Turks had asked for a meeting between the two leaders but said: "The president has been told about this request... That's all I can say." The heightened rhetoric came after Turkish Prime Minister Ahmet Davutoglu had sought to ease the tensions and appealed for the world to unite against IS, in an editorial published in The Times newspaper.

"While the measures to defend our territory will remain in place, Turkey will work with Russia and our allies to calm tensions," Davutoglu wrote.

The downing of the plane has highlighted the difficulty of forging consensus on Syria but Davutoglu said the world should unite against a "common enemy".

"The focus should be to tackle, head-on, the international threat that Daesh (IS) poses, securing the future of Syria and seeking a solution to the current refugee crisis." But the Kremlin said Western powers were not ready to line up with Russia to fight the IS group.

"At the moment, unfortunately, our partners are not ready to work within the format of a single coalition," Peskov told reporters.

His comments came a day after Putin and French President Francois Hollande agreed to coordinate strikes against IS, although differences remained over the future of Assad.