Politics ends at the border. Inside the United States border, it's Democrats and Republicans. But outside, we are Americans with an American foreign policy.

The people who served in the Clinton or Obama administrations, and those who served in the Bush administration, are very similar in their outlook. There is a bipartisan American foreign policy that would certainly continue under Mrs Hillary Clinton, if she were to win. She served under President Barack Obama, so you would see an evolution of the same policy.

But for a Trump administration, who's going to be his foreign policy and defence team? Many in the Republican foreign policy establishment have all said, "Never Trump", and expressed support for Mrs Clinton. If he wins, do we see the same policies of engagement, multilateralism and focus on Asia witnessed over the past four or six presidential terms, or do we see something different? That's the real wild card.

While there's a system of checks and balances, with the executive, legislative and judiciary balancing one another, the President has primacy when it comes to foreign policy. If President Donald Trump were to say, "I am opposed to the Trans-Pacific Partnership (TPP), I will never allow the TPP", there would be no TPP. So there would be significant impact if he won, from what he has said he would do with trade, tariffs, immigration and alliances.

During campaigning, candidates could say things without considering them from a governing context. But a lot of the basic principles become what they govern upon, if elected, so voters should pay attention to that. 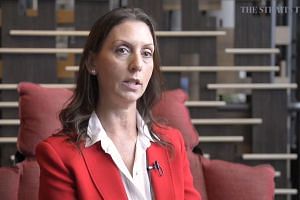 This has been a unique election, but there can be a return to the pre-election norm. Parties can self-correct. The Democratic Party lost three straight elections from 1980 to 1988, then figured it had to field someone more moderate and centrist, Mr Bill Clinton, starting a winning streak of four of the past six elections. If the Republicans lose this time, they might change and nominate someone more appealing across the entire political spectrum, not just primary voters.

It is very unsettling when one candidate says upfront, "I don't know if I'm going to accept the result of the vote, because the entire system is rigged". If Mr Trump doesn't accept it, but the rest of the Republican Party does, then we will go on, and government will function as it always has. After the 2000 election, Mr Al Gore and the Democratic Party accepted the results of the Florida re-count, and we moved on with our usual two-party system. Everyone seems to indicate, other than Mr Trump, that this time is not going to be any different.

A version of this article appeared in the print edition of The Straits Times on October 29, 2016, with the headline 'Result will decide if US maintains Asia policy'. Subscribe
Topics:
More
Whatsapp Linkedin FB Messenger Telegram Reddit WeChat Pinterest Print Purchase Article Copy permalink