A step back, says China's media

China reacted with disappointment - not anger, as some might have feared - at the lack of a clear apology and direct expression of remorse from Japan's Prime Minister Shinzo Abe over its war-time actions.

A commentary by the official Xinhua news agency called Mr Abe's remarks yesterday a "retrogression" from a 1995 statement which admitted Japan's war past and expressed "deep remorse" and a "heartfelt apology" for its war crimes.

"Closely watched both at home and abroad, Abe trod a fine line with linguistic tricks, attempting to please his right-wing base on the one hand and to avoid further damage in Japan's ties with its neighbours on the other," the commentary added.

It also dismissed Mr Abe's statement - delivered to mark the 70th anniversary of the end of World War II today - that Japan's post-war generations who have nothing to do with the war should not be "predestined to apologise".

"Those countries which suffered from Japan's aggression will never forget that dark period of history, as Japanese will always remember the horrific scenes of A-bombed Hiroshima and Nagasaki," it wrote.

Japan occupied north-east China from 1931 and launched a full-scale invasion in 1937. Japan surrendered on Aug 15, 1945 after the US dropped atomic bombs on the country. China's World War II casualties range from 15 million to 20 million. 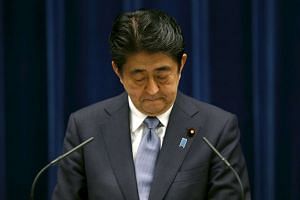 Appeasing neighbours not simple: US experts

Chinese netizens displayed wide- ranging responses: Some welcomed the indirect apology, others said China should not be too hung up on the issue, while one challenged Mr Abe to attend the parade at Tiananmen Square on Sept 3 to prove his "profound grief".

Chinese observers believe the government is likely to react with restraint to Mr Abe's statement as he at least stood by past apologies.

"We have to wait and see if he lives up to his promises in his speech of contributing to peace and prosperity. Also, if future Japan leaders are more right-leaning than Abe, we will have to hold them accountable," said Professor Wang.

A version of this article appeared in the print edition of The Straits Times on August 15, 2015, with the headline 'Reactions in Asia and US to Abe's WWII remarks'. Subscribe
Topics:
More
Whatsapp Linkedin FB Messenger Telegram Reddit WeChat Pinterest Print Purchase Article Copy permalink