Russian leader says it's a mistake to pressure Pyongyang and that direct dialogue, not threats, is the only solution

MOSCOW • Russian President Vladimir Putin warned yesterday that the tense stand-off between North Korea and the US was on the verge of large-scale conflict and said it was a mistake to try to pressure Pyongyang over its nuclear missile programme.

Mr Putin, who is due to attend a summit of the Brics nations in China next week, wrote in an article published on the Kremlin's website that he favoured negotiations with North Korea instead. "It is essential to resolve the region's problems through direct dialogue involving all sides without advancing any preconditions (for such talks)," he wrote.

"Provocations, pressure, and bellicose and offensive rhetoric is the road to nowhere," he added.

The situation on the Korean Peninsula had deteriorated so much that it was now "balanced on the verge of a large-scale conflict", said the Russian leader.

North Korea has been working to develop a nuclear-tipped missile capable of hitting the US and recently threatened to land missiles near the US Pacific territory of Guam.

On Tuesday, Pyongyang, which sees joint war games between the US and South Korea as preparations for invasion, raised the stakes in its stand-off with Washington and its allies by firing an intermediate-range missile over Japan. 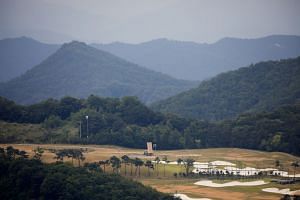 The test has been widely condemned, with the United Nations Security Council unanimously demanding that Pyongyang halt its nuclear programme. But most analysts say this is an unlikely prospect in the near future.

Instead, the Stalinist state has continued to trumpet its achievements in the field, with its propaganda machine in overdrive. On Thursday, it issued a new series of provocative stamps commemorating the latest missile test. "In Russia's opinion, the calculation that it is possible to halt North Korea's nuclear missile programmes exclusively by putting pressure on Pyongyang is erroneous and futile," Mr Putin wrote.

A road map formulated by Moscow and Beijing, which would involve Pyongyang stopping work on its missile programme in exchange for the US and South Korea halting large-scale war games, was a way to gradually reduce tensions, the Russian leader said.

France, too, has joined the growing list of countries urging China to do more to restrain North Korea. Foreign Minister Jean-Yves Le Drian, who spoke to his Chinese counterpart Wang Yi, said everything had to be done to ensure the latest round of UN sanctions was implemented. He also urged China, North Korea's main trade partner, to do its utmost to enforce them. "North Korea must find the path to negotiations. It must be diplomatically active," he told RTL radio on Thursday.

It is essential to resolve the region's problems through direct dialogue involving all sides without advancing any preconditions (for such talks). Provocations, pressure, and bellicose and offensive rhetoric is the road to nowhere.

RUSSIAN PRESIDENT VLADIMIR PUTIN, in an article published on the Kremlin's website, said he favoured negotiations with North Korea instead.

Mr Le Drian also said that North Korea would have capability to send long-range ballistic missiles in a few months.

"The situation is extremely serious... we see North Korea setting itself as an objective to have tomorrow or the day after missiles that can transport nuclear weapons. In a few months that will be a reality," he said. "At the moment when North Korea has the means to strike the United States, even Europe, but definitely Japan and China, then the situation will be explosive," Mr Le Drian added.

Meanwhile, US heavy bombers and stealth jet fighters took part in a joint live fire drill in South Korea on Thursday and separately flew with Japanese warplanes. The flights were seen as as a show of force against the North.

And Japanese Deputy Prime Minister and Finance Minister Taro Aso has cancelled a planned trip to the US next week because of national security uncertainties posed by North Korea.