ABOARD THE PAPAL PLANE • Pope Francis said the Roman Catholic Church has faced a persistent problem of sexual abuse of nuns by priests and even bishops, the first time he has publicly acknowledged the issue.

Catholic nuns have accused clerics of sexual abuse in recent years in India, Africa, Latin America and Italy, and a Vatican magazine last week mentioned nuns having abortions or giving birth to the children of priests.

But Pope Francis has never raised the issue until he was asked to comment during a news conference aboard the papal plane returning to Rome from his trip to the United Arab Emirates.

"It's true," he said on Tuesday. "There are priests and bishops who have done that."

The Pope's admission opens a new front in the long-running scandal of sexual abuse by priests, recognising nuns who have tried for years to call attention to their plight.

The pontiff said his predecessor Benedict XVI had dissolved a religious order of women because of "sexual slavery on the part of priests and the founder". He was referring to a scandal concerning a French congregation called “Soeurs Contemplatives de Saint Jean”.

That community admitted in 2013 that the priest who founded it had behaved "in ways that went against chastity" with several women in the order, according to French Catholic newspaper La Croix.

When Pope Francis talked about “sexual slavery” he meant “manipulation, a type of abuse of power also present in sexual abuse”, said the Vatican on Tuesday.

Pope Francis said the Church has “suspended several clerics” and the Vatican has been “working (on the issue) for a long time”. The abuse was "still going on, because it's not something that just goes away like that", he added.

Last November, the organisation representing the world's Catholic women's religious orders, the International Union of Superiors General, publicly denounced the "culture of silence and secrecy" that contributed to abuse, and urged nuns to report abuse to law enforcement.

Pope Francis' admission of the problem was "the umpteenth blow to the Church's image, but also an occasion to show that change really is under way", Ms Lucetta Scaraffia said. The key is "to strip priests of their air of power, which is what allows them to behave this way".

A top official in the Vatican office that handles sexual abuse allegations resigned last month after a former nun accused him of making sexual advances during confession.

The official, the Reverend Hermann Geissler, chief of staff in the Vatican's doctrinal office, denied the allegation, the Vatican said.

An article last week in Women Church World, the women's magazine of Vatican newspaper L'Osservatore Romano, blamed the abuse on the outsized power of priests. 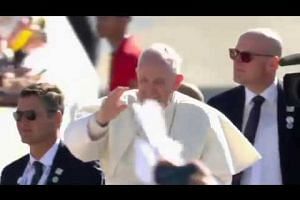 "The abuse of women results in procreation and so is at the origin of the scandal of imposed abortions and children not recognised by priests," wrote the article's author Lucetta Scaraffia, a feminist intellectual and editor-in-chief of Women Church World.

Asked about these developments on Tuesday, Pope Francis said it was a continuing problem and that the Vatican was working on the issue. Some priests, he said, have been suspended. "Should more be done? Yes," he added. "Do we have the will? Yes. But it is a path that we have already begun."

Pope Francis' public admission on the issue marks a new chapter in the abuse crisis rocking the Catholic Church.

"It is the first time that the Pope, but also the Church as an institution, has publicly admitted this abuse is taking place, and that's hugely important," Ms Scaraffia told Agence France-Presse yesterday.

Pope Francis' admission of the problem was "the umpteenth blow to the Church's image, but also an occasion to show that change really is under way", Ms Scaraffia said. The key is "to strip priests of their air of power, which is what allows them to behave this way".