Central African Republic is most unhappy place; even wealthier nations are not spared

LONDON • World happiness levels are at their lowest in over a decade, with the number of people who say they feel stressed and worried rising, according to a survey published yesterday.

The conflict-hit Central African Republic was the world's unhappiest place last year, with Iraq in second place, according to the ranking by pollsters Gallup.

"Collectively, the world is more stressed, worried, sad and in pain today than we have ever seen it," the group's managing editor, Mr Mohamed Younis, wrote in a foreword to the study.

Gallup surveyed more than 154,000 people in 146 countries on whether they had felt pain, worry, stress, anger or sadness the previous day. It said the global mood was at its gloomiest since the first such survey in 2006.

Sub-Saharan Africa led the way, with 24 of 35 countries surveyed reaching 10-year happiness lows last year, often due to civic unrest crippling healthcare systems and hunger. the study's lead author Julie Ray told Thomson Reuters Foundation by phone: "In the Central African Republic and some of these other places, high percentages of the population are just struggling to afford the basics."

The Central African Republic has been ravaged by violence, with most of the country now beyond the control of the government, and about three in four residents said they experienced pain and worry.

As in past years, people in most of the countries with the highest negative scores last year were contending with some type of discord, and many at the top of the list last year have been there for several years.

Egypt, the Palestinian Territories, Madagascar and Niger were the only countries or areas on the list last year that were not on the top of the list the previous year. 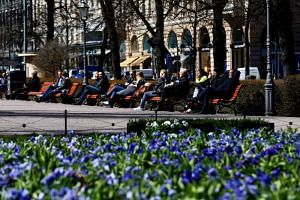 Wealthier countries were not immune to the dip in mood. About half the Americans interviewed said they were stressed - roughly the same proportion of respondents as in the Central African Republic.

Economist Jan-Emmanuel De Neve said it was "disturbing" to see the global mood souring against a backdrop of rising wealth and material progress.

"There is probably a more structural indicator around the increasing wealth not being inclusive enough," said Associate Professor De Neve at the University of Oxford, who has written about the link between income and happiness.

Paraguay topped a second table of most positive countries, in which residents were asked if they felt well rested, had been treated with respect, enjoyed themselves or learnt something the previous day.

War-torn Yemen and Afghanistan landed at the bottom.