Need to ensure region remains open for trade and business, he says

The Zika virus may have entrenched itself in South-east Asia, Prime Minister Lee Hsien Loong said yesterday as he called on his counterparts to join hands and tackle it so that regional trade does not take a hit.

Speaking at the 28th Asean Summit, Mr Lee said the region had to prepare for a prolonged fight against Zika.

"We should prepare ourselves for a possibly extended campaign against Zika while ensuring that the region remains open and connected for business and trade."

Mr Lee also affirmed Singapore's willingness to work with Asean countries to combat Zika. Cases have been reported in Thailand, the Philippines, Indonesia, Vietnam and Malaysia. 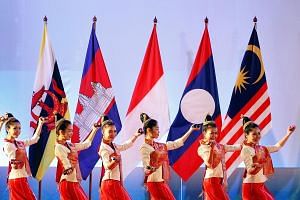 Plan for logistics hub in Laos

And while Zika was the latest threat that the region faced, Mr Lee also reminded the grouping that old problems - like the haze - also had to be tackled together.

It was crucial, for example, to put into operation the Asean Haze Monitoring System adopted three years ago, he said. This would send a strong signal to the errant companies that have been causing the haze pollution, said Mr Lee.

He noted that all 10 member states have ratified the agreement on haze pollution and adopted a road map aiming for a haze-free Asean by 2020. By tackling such issues "I believe we can overcome our challenges and prosper together," he said.

At their meeting yesterday, Asean leaders launched a masterplan to boost regional connectivity by 2025 and signed a declaration to respond jointly to disasters both within and outside the region.

The message that Asean will best thrive if countries in the grouping become more tightly knit was a central theme in the day's events and a common refrain made by many of the leaders, including PM Lee.

The region's importance for global stability was also underscored when United States President Barack Obama promised yesterday that his country's engagement with Asia will endure beyond his term.

Mr Obama, who is the first sitting US president to visit Laos, vowed to push Congress to pass the Trans-Pacific Partnership (TPP) before he leaves office. "America's interest in the Asia-Pacific is not new. It's not a passing fad. It reflects fundamental national interests," he said.

"There is a need for us to closely follow these developments and continue to enhance Asean cooperation and collaboration with the international community... to respond to and address challenges in a timely manner," he said.

US committed to Asia-Pacific for long term: Obama

Plan for logistics hub in Laos

A version of this article appeared in the print edition of The Straits Times on September 07, 2016, with the headline 'PM calls on Asean to tackle Zika together'. Subscribe
Topics:
More
Whatsapp Linkedin FB Messenger Telegram Reddit WeChat Pinterest Print Purchase Article Copy permalink