Sultan Abdullah is scheduled to take his oath of office as the 16th king in a ceremony that will be witnessed by other Malay rulers, reported Bernama news agency.

The 59-year-old was elected king last week after a special meeting of the Conference of Rulers.

Sultan Abdullah succeeds Sultan Muhammad V, the ruler of Kelantan, who abdicated on Jan 6 after having reigned for about two years. Sultan Muhammad V's abdication followed news that he had married a Russian beauty queen outside Malaysia.

Sultan Abdullah had succeeded his ailing father as ruler of Pahang earlier this month.

He will reign as Yang di-Pertuan Agong, or Supreme Ruler, for five years.

The Sultan of Perak, Sultan Nazrin Shah, will also take his oath of office as the deputy king. 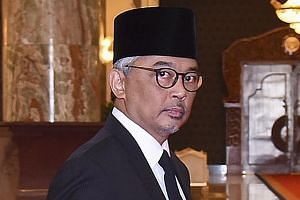 The 62-year-old had been serving as acting king after the abdication.

He will continue his previous role as deputy for the next five years.

About 500 guests - including members of royal families, government officials and other dignitaries - are expected to attend the ceremony steeped in tradition.

The Pahang government declared a special state holiday today to enable the people to witness the event.