Who knew Singaporeans were such astronomy buffs?

Despite the early hour, thousands gathered at specific spots around the island on Wednesday to catch a glimpse of the solar eclipse.

The last one happened in January 2009.

While some teachers took the opportunity to educate their students by watching a livestream in school, most star-struck fans were out and about, and were more than happy to share their experiences on social media.

According to Twitter, almost 600,000 tweets have been sent around the globe, with traffic reaching more than 1,000 tweets a minute at 8.33am on March 9.

The top tweet from The Straits Times depicted a plane flying past the sun as the eclipse began, garnering more than 1,400 retweets.

Over at our Facebook page, a collection of photos from the livestream, as well as from photojournalists on the ground, reached close to two million users, and had more than 56,000 likes, comments and shares.

Even Prime Minister Lee Hsien Loong got in on the act. 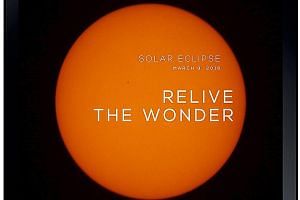 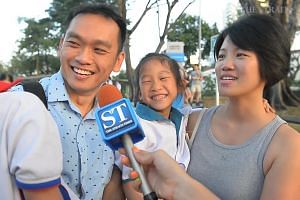 While he did not manage to land a good shot, his request to fans of his Facebook page to share their pictures elicited a barrage of responses, many of them humorous.

The top reply, for instance, is a picture of the aptly named Eclipse mints by user Lian Wei who wrote: "I did not catch the eclipse, but I managed to eat it this morning."

Of course, nobody captures celestial bodies quite like the professionals.

"Wow, a total solar #eclipse2016! See the moon pass directly in front of the sun," it read.

If you have somehow missed all the action, fret not.

The Straits Times has launched a new e-book which includes photos from our readers here: http://str.sg/3hu

A comedy group in Saudi Arabia has gone a little too far, it seems.

In a prank video, a bearded actor in a traditional Saudi outfit poses as a suicide bomber who drives a taxi around the city looking for "victims".

Once he picks up a passenger, he asks them what they think about the war against unbelievers, and pulls back his robes to reveal fake bombs strapped to his chest.

In one instance, a boy is seen pleading with the driver to spare him.

In another, the passenger opens the door and jumps out of the taxi.

"We're just joking around," the driver says eventually, before pointing to the various cameras hidden in the vehicle.

The video, by prankster group Tube Up, has been taken down after complaints were lodged.

Singapore, too, has seen prank videos that went overboard.

In 2014, a local prankster group released a video in preparation for Halloween.

In the clip, members of the group dress up in hoodies and masks, and approach members of the public menacingly with fake knives drawn. Needless to say, many of the people run away in fear.

Within a week, the group was warned by the police, and told to refrain from staging pranks which "generate unnecessary alarm, fear and panic in the community".

A "friend" request was all it took for justice to prevail in a rural province in Canada.

Mr Stefan Tergesen, a shop owner in Manitoba, was shocked to find his general store broken into earlier this month.

Dozens of people identified the suspect within hours of the video being uploaded onto the store's Facebook and Instagram accounts.

Instead of turning the teen over to the police, Mr Tergesen decided to send him a "friend" request.

"I wanted him to know for sure that we knew who he was," he told The Star. "And hopefully get my merchandise back before (he did) something stupid with it," Mr Tergesen added.

In the end, common sense won the day.

The suspect told Mr Tergesen that he would be turning himself in.

He said in a remorseful Facebook message: "I couldn't live with myself and I'll be returning everything. I was intoxicated and not in the right mindset."

A version of this article appeared in the print edition of The Sunday Times on March 13, 2016, with the headline 'Over the moon with solar eclipse here'. Subscribe
Topics:
More
Whatsapp Linkedin FB Messenger Telegram Reddit WeChat Pinterest Print Purchase Article Copy permalink