LIMA (AFP) - United States (US) President Barack Obama defended his legacy on free trade and security issues on Sunday (Nov 20) at a summit of Asia-Pacific leaders thrown into uncertainty by the election of his radically different successor, Mr Donald Trump.

Ending his final foreign visit as president, Mr Obama pressed Russian President Vladimir Putin - who has a far warmer relationship with Mr Trump - on Syria and Ukraine, and rallied allies to forge ahead with free trade plans that the President-elect has trashed.

Mr Trump's shock election victory has made it a bittersweet goodbye for Mr Obama, who campaigned against the brash billionaire as unfit to succeed him but is now asking the international community to give the Republican time and an open mind.

In what may be his last meeting with Mr Putin, Mr Obama called for greater efforts to end the violence in war-torn Syria, as concern mounts over a ferocious bombing campaign by the Moscow-backed regime in rebel-held parts of Aleppo.

He also urged Mr Putin to "uphold Russia's commitments" under the frayed peace accords to end conflict in eastern Ukraine. 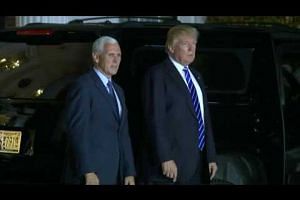 President Obama says he will speak out if core US values, ideals are threatened

Both Mr Turnbull and Mr Trudeau pledged to keep working to advance open trade and said affectionate goodbyes to the American President.

"It's a great moment, but a sad moment, to have our last meeting," said Mr Turnbull.

"I am going to miss having Barack around," said Mr Trudeau.

The summit, which gathers some of the world's most powerful leaders on both sides of the Pacific, is seeking to live down old jokes that Apec, formally named Asia-Pacific Economic Cooperation, is "four adjectives in search of a noun and a verb" - an ill-defined group that struggles to take decisive action.

A draft version of its final statement seen by AFP praises open markets, denounces protectionism and warns that curbing free trade will slow the ongoing recovery of the world economy.

It also vows greater efforts to make sure the benefits of trade are more equally distributed and to better assist those on the losing end.

It is a far cry from the fiery language and visceral appeals Mr Trump used on the campaign trail to appeal to working-class supporters who feel globalisation has made them worse off.

The Republican president-elect's attacks on free trade deals and vows to cut back the US role as "policeman of the world" are causing jitters in the Pacific Rim, where Washington and Beijing compete for influence.

In a region hungry for trade, Mr Trump's anti-trade stance has left even longtime US allies looking to a once unlikely place to fill the void: China, which was excluded from the TPP.

China's Xi has set himself up as the anti-Trump at this week's summit, defending open markets and offering leadership on other trade agreements to rival the TPP.

It is unclear whether there is any future for the TPP.

Mr Trump campaigned against the proposal as a "terrible deal" that would "rape" the US by sending American jobs to countries with cheaper labour.

Some experts say Mr Trump's attacks on the agreement and his Republican allies' control of Congress mean it is dead in the water.

Others say the deal-making real estate mogul could negotiate a number of changes and then claim credit for turning it around.

New Zealand Prime Minister John Key joked on Saturday that it could be rebranded the "Trump Pacific Partnership". And Singapore's Prime Minister Lee Hsien Loong said he was hopeful the TPP would survive the unexpected "twist in the road" presented by the US election.

"In the meantime, the other TPP partners should carry on with the ratification process," he said.

Alternatively, China is backing a free trade zone across Apec - a 21-member group that accounts for nearly 40 per cent of the world's population and nearly 60 per cent of the global economy.

It is also pushing a 16-member Regional Comprehensive Economic Partnership (RCEP) that excludes the United States.