Politburo member Nguyen Thien Nhan, 63, was named yesterday as the party secretary for the country's commercial capital after 56-year-old Dinh La Thang was shunted from that post as well as the committee.

Mr Thang was demoted for financial misconduct committed when he was chairman of the state-owned Vietnam Oil and Gas Group (PetroVietnam) between 2009 and 2011, in what is considered a rare development in the one-party state. Yesterday, the former transport minister was pushed down the ranks to be deputy chief of the party's central economic commission.

Ho Chi Minh City in the south is a financial hub which powers much of the growth in the country of 94 million. Its leaders are usually groomed for top roles in the ruling party. Mr Thang, seen in some quarters as a rising star, had occupied the post for over a year before he was ousted.

Dr Le Hong Hiep, a fellow at the ISEAS - Yusof Ishak Institute, told The Straits Times that Mr Thang had established a reputation as a "dynamic and action-oriented" politician. "That has appealed to a public tired of officials speaking a lot and doing nothing." 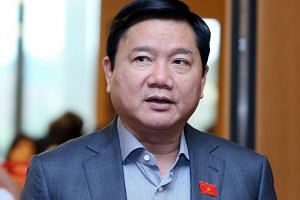 But Mr Thang "made both mistakes and very serious violations during his management and leadership... badly influencing the prestige of local party organisations", the party noted.

Vietnam is still trying to clean up a banking sector laden by years of bad debt involving state-owned enterprises.

According to Vietnamese news reports, Mr Thang was found responsible for various illegal projects at PetroVietnam and investment in Ocean Bank, which resulted in excessive losses.

Ocean Bank's former chairman Ha Van Tham as well as several executives have also been accused of jeopardising the bank by violating lending rules. The debt-ridden bank was acquired by Vietnam's central bank in 2015.

Ho Chi Minh City's new leader, Dr Nhan, has a master's degree in public administration from the University of Oregon and a doctorate in cybernetics from a German university.

The fluent English-speaker and former education minister is also known for a high-profile campaign some 10 years ago to tackle rampant cheating in examinations, which remains a problem today.

He is familiar with Ho Chi Minh City, having once served as the city's vice-chairman.