NEW YORK • Bangladesh's leader has accused neighbouring Myanmar of finding new excuses to delay the return of more than 700,000 Rohingya who were forced across the border over the past year.

In an interview late on Tuesday, Prime Minister Sheikh Hasina said under no circumstance would the refugees remain permanently in her already crowded country.

"I already have 160 million people in my country," she said, when asked whether Bangladesh would be willing to walk back its policy against permanent integration. "I can't take any other burden... My country cannot bear."

Ms Hasina was speaking to Reuters in New York, where she is attending the annual United Nations meeting of world leaders.

The Prime Minister said she does not want to pick a fight with Myanmar over the refugees. But she suggested patience is growing thin with Myanmar's de facto leader, Nobel Peace Prize winner Aung San Suu Kyi, and its military that she said wields the "main power" there.

Ms Hasina has previously called on the international community to pressure Myanmar to implement the deal.

Calls to Myanmar's government spokesman Zaw Htay went unanswered. He recently said he would no longer answer media queries by telephone, but would answer questions at a biweekly press conference.

The Rohingya fled to refugee camps in Bangladesh after a bloody military campaign against the Muslim minority in Myanmar's Rakhine State.

The two countries reached a deal in November to begin repatriation within two months but it has not started, with the stateless Rohingya still crossing the border into Bangladesh and the refugee camps at Cox's Bazar. 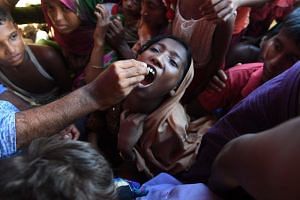 Myanmar army should be removed from politics: UN probe

"They agree to everything but, unfortunately, they don't act, that is the problem," Ms Hasina said of Myanmar.

Myanmar has said it is ready to take back the refugees and has built transit centres to house them initially on their return. But it has complained that Bangladesh has not provided its officials with the correct forms. Bangladesh has rejected those claims and UN aid agencies say it is not yet safe for the refugees to return.

Given the delays, Bangladesh has been preparing new homes on a remote island called Bhasan Char, which rights groups have said could be subject to flooding. Cox's Bazar is also vulnerable to flooding, but this year's monsoon season was light.

Ms Hasina said building permanent structures for refugees on the mainland "is not at all a possibility (and) not acceptable", since they are Myanmar citizens and must return.

The Rohingya regard themselves as native to Myanmar's Rakhine state, but are widely considered as interlopers by the country's Buddhist majority and are denied citizenship.

Human rights groups and Rohingya activists have estimated thousands died in last year's security crackdown, which was sparked by attacks by Rohingya insurgents on security forces in Rakhine in August last year.