JERUSALEM (AFP) - The World Bank warned on Tuesday (Sept 25) that the Gaza Strip's economy is in "free fall" as cuts to aid and salaries add to an already crippling Israeli blockade on the Hamas-run enclave.

The bank's report will be presented to the international donor group for Palestinians, known as the Ad Hoc Liaison Committee, at its meeting in New York on Thursday (Sept 27) on the sidelines of the UN General Assembly.

The meeting will coincide with the speeches to the assembly of both Palestinian President Mahmud Abbas and Israeli Prime Minister Benjamin.

Already squeezed by the more than decade-long Israeli blockade, Gaza's economy has been further weakened by US aid cuts and financial measures by Abbas's Palestinian Authority.

Abbas has been seeking to pressure Islamist group Hamas, which expelled his loyalists from the territory in 2007, as well as save costs.

According to the World Bank, he has reduced monthly payments to Gaza by some US$30 million (S$41 million).

US President Donald Trump's administration has meanwhile cut more than US$500 million in aid to the Palestinians, including ending all support for the UN agency for Palestinian refugees. 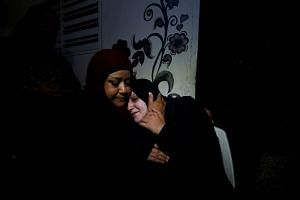 US ends final source of aid for Palestinian civilians: Officials

"The economic deterioration in both Gaza and West Bank can no longer be counteracted by foreign aid, which has been in steady decline, nor by the private sector, which remains confined by restrictions on movement, access to primary materials and trade," the bank said.

Gaza's economy shrunk by 6 per cent in the first quarter of 2018 "with indications of further deterioration since then", it said.

The bank said one in two Gazans now lives below the poverty line and that unemployment is running at 53 per cent.

More than 70 per cent of young people are jobless, it said.

"Increased frustration is feeding into the increased tensions which have already started spilling over into unrest and setting back the human development of the region's large youth population," said Marina Wes, World Bank director for the West Bank and Gaza.

On Sept 20, UN envoy for the Middle East peace process Nickolay Mladenov told the UN Security Council that "Gaza can explode any minute".

Israel and Palestinian militants in Gaza have fought three wars since 2008.

In recent months, mass protests along Gaza's border with Israel have triggered repeated deadly clashes with the army, prompting warnings of the risk of a new conflict.

At least 187 Palestinians have been killed by Israeli fire since the protests began on March 30. One Israeli soldier has been killed in that time.

Israel says its actions are necessary to defend the border and accuses Hamas of using the protests as cover to attempt infiltrations and attacks.

Palestinians and human rights groups say protesters have been shot while posing no real threat.

Envoy Mladenov and Egyptian officials have been seeking to broker a long-term truce between Israel and Hamas, but those efforts have stalled in recent weeks.