Speaking from the podium of the 193-member United Nations General Assembly, Sheikh Tamim renewed the call "for an unconditional dialogue based on mutual respect for sovereignty".

Saudi Arabia, the United Arab Emirates, Egypt and Bahrain cut diplomatic and trade links with Qatar on June 5, suspending air and shipping routes with the world's biggest exporter of liquefied natural gas, which is home to the region's biggest US military base.

The nations say Doha supports regional foe Iran and extremists, charges Qatar's leaders deny. Kuwait has been trying to mediate the dispute and the United States has taken an increasingly robust role in trying to bring an end to the crisis, but as yet to no avail.

Trump and Sheikh Tamim later held a meeting in which the emir was careful to emphasise the strong Qatar-US relationship after Trump appeared to be more sympathetic to the Saudi position at the start of the crisis.

We are right now in a situation where we're trying to solve a problem in the Middle East and I think we'll get it solved," Trump said, describing Sheikh Tamim

as a long-time friend. "I have a very strong feeling that it will be solved pretty quickly." For more than 100 days 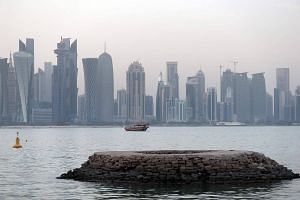 Qatar Crisis: How the Gulf nation is responding to blockade by bigger neighbours

Qatar has been subject to a Saudi-led boycott that shuttered Qatar's only land border, denied air space to its national airline and suspended maritime links.

Qatar hosts Al Udeid air base, the largest US military facility in the Middle East.

"As you said, Mr. President, we have a problem with our neighbours," Tamim said, adding that with Trump's intervention,"hopefully we can find a solution for this problem." Trump, who has said he would be willing to mediate the worst dispute in decades among the US-allied Arab states and Qatar, said he had a "very strong feeling" the dispute would be solved"pretty quickly".

In a speech severely criticising the four Arab states' conduct during the dispute, the emir said the countries were inflicting damage on the "war on terror".

"The countries who imposed the blockade on the State of Qatar interfere in the internal affairs of many countries, and accuse all those who oppose them domestically and abroad with terrorism.

By doing that they are inflicting damage on the war on terror," Sheikh Tamim said in his speech to the annual gathering of world leaders.

"We have refused to yield to dictations by pressure and siege."

A Gulf official from one of the opposing countries said it was “unfortunate that Emir Tamim continues to talk about a blockade when even he in the same speech acknowledged that his ship lanes are open.”

“It’s disappointing that he talks about interference in the internal affairs of others while refusing to admit that is a core part of the four nations’ complaints against Qatar,” the official added.

Earlier this month, Saudi Arabia suspended any dialogue with Qatar, accusing it of "distorting facts", just after a report of a phone call between the leaders of both countries suggested a breakthrough in the Gulf dispute.

Saudi Arabia's Crown Prince Mohammed bin Salman spoke by the telephone with Qatar's Emir in the first publicly reported contact between the two leaders since the start of the crisis.