Emerging onto their balconies, they watched Western strikes light up the sky over Damascus.

For around 45 minutes, explosions and the sound of warplanes roared over Damascus, a stronghold of Syria's regime, as the US, France, and Britain carried out raids on military installations nearby and in the province of Homs.

"I heard the strike and woke up. I checked the Internet and read: barefaced attack by America, France, and Britain," said Ms Sawsan Abu Tableh.

She and other residents described hearing a volley of fire in the morning, and seeing plumes of thick smoke emerging from the city's north and east.

"I woke up to the sound of the strike at 4am and checked the news," said 49-year-old Rahmeh Abu Hamra, who lives in the eastern suburb of Jarmana.

At that moment, halfway around the world, US President Donald Trump was announcing the joint military strikes on Syria.

Ms Abu Hamra rushed out onto her balcony and saw streams of people heading down to central Damascus in an impromptu rally as day broke.

Just after the barrage of strikes began, Syria announced it was activating its air defence system to block the attack.

The army said around 110 missiles were fired on Syria, but air defences shot most of them down.

Mr Nedher Hammoud, 48, jumped out of bed at the sound of the blasts and clambered up to his rooftop.

"I went out on my roof this morning and saw the missiles being shot down like flies," Mr Hammoud told AFP.

"History will record that Syria shot down missiles - and not just missiles. It shot down American arrogance." Still in his pyjamas, Mr Hammoud scrambled to join the crowds of people heading to the famed Umayyad Square to show their support for Syria's President Bashar al-Assad.

Draped in government flags and blaring patriotic tunes, dozens of Syrians arrived on bicycles, on foot and in cars spray painted with the red, white, and black colours of the Syrian flag.

A traffic jam had already started to form around the square, and young Syrians leaned out of their car windows to take selfies as military personnel looked on.

"God is protecting you, Damascus!" some called out, and others chanted in support of Mr Assad and the army. 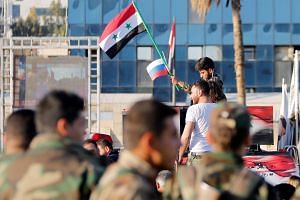 Syria strikes: The targets, the assets used and the reactions

Soldiers threw up two fingers to flash the victory sign near a car with pictures showing the President, his late father Hafez al-Assad and ally Hassan Nasrallah, who heads the Iran-backed Lebanese Shi'ite movement Hizbollah.

Car horns blared and people clapped, swaying back and forth to pro-army tunes.

"Bashar, we're at your command! Let the world go up in flames!" people chanted.

Ms Amina al-Fares, 58, came to the rally dressed in black.

"I lost my recently-married nephew, my son, my brother's children, all for Bashar al-Assad," she told AFP, of relatives killed in Syria's seven-year war.

Ms Fares said she felt the bombing early in the morning when she was drinking mate, but said she was not afraid.

"I heard the first strike, then the second, and I went out onto my balcony," she said.

"Trump thought we'd be in bomb shelters, but here we are in Umayyad Square."

Mr Assad, too, appeared determined to show he was unfazed.

In footage published by the presidency, he strolled through the grandiose marble halls of his office holding a briefcase, as if arriving for a normal day of work.