WASHINGTON (AFP) - Iranian President Hassan Rouhani warned on Tuesday (Sept 19) that the United States would forfeit the trust of the international community if it abandons a nuclear accord with Teheran.

“If the United States were not to adhere to the commitments and trample upon this agreement, this will mean it will carry with it the subsequent lack of trust of countries,” Rouhani, in New York to attend the UN General Assembly, told NBC.

“After such a possible scenario, which country would be willing to sit across a table from the United States of America and talk about international issues? 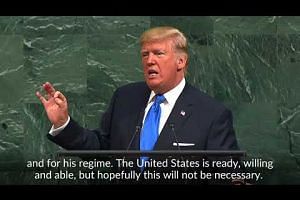 Donald Trump, in UN debut, says US may have to ‘totally destroy’ North Korea 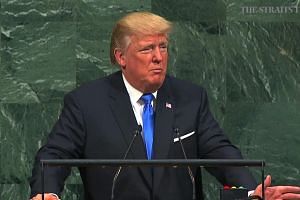 “The greatest capital that any country has is trust and credibility.”

In his address to the UN on Tuesday, Trump strongly hinted that his administration was ready to abandon the agreement by calling it an “embarrassment” to the United States.

Were Trump to abandon the seven-nation deal which was agreed in 2015, Rouhani said Iran could resume its previous nuclear activities which it has always insisted was solely to meet its energy needs.

“Certainly what I mean is a return to peaceful activities only,” he said.

“Clearly, unequivocally, we were members of the (nuclear) non-proliferation treaty. We were signatories to it, we did not and do not intend to leave it.

“We are also adhering to additional protocols, so we will never go towards production of nuclear weapons.

“Just as in the past we never intended going towards that path nor did we ever – it has always been peaceful.”

Trump, who has previously called the agreement “the worst deal ever negotiated,” has to certify in mid-October whether he believes Iran is abiding by the agreement.

He gave his strongest hint to date in Tuesday’s address that he would quit the accord by telling his fellow leaders that the “deal is an embarrassment to the United States, and I don’t think you’ve heard the last of it”.