SYDNEY (AFP) - The United States on Sunday (Aug 4) welcomed a ceasefire in Syria's north-western Idlib region after months of deadly government bombardments but insisted that attacks against civilians must stop.

Air strikes on Idlib province halted last Friday after the Syrian regime agreed to a truce on the condition that rebel backer Turkey implements a buffer zone in the area.

Most of the region and parts of Hama, Aleppo, and Latakia - which currently hosts some three million people - are controlled by Hayat Tahrir al-Sham, an extremist group led by Syria's former Al-Qaeda affiliate.

The area is supposed to be protected from a massive government offensive under a September Turkish-Russian deal, but it has come under increasing fire by Damascus and its backer Moscow since the end of April.

The government of Syrian President Bashar Al-Assad has accused Turkey of dragging its feet in implementing the deal, which provided for a buffer zone of up to 20km between the two sides, free of heavy and medium-sized weaponry.

Washington welcomed the conditional ceasefire, but "attacks against civilians and civilian infrastructure must stop", US State Department spokesman Morgan Ortagus said in a statement.

"The United States believes there can be no military solution to the Syrian conflict, and only a political solution can ensure a stable and secure future for all Syrians," she said.

The US also reiterated its support for a United Nations-led peace effort, with Ms Ortagus calling it "the only viable path to a political solution". 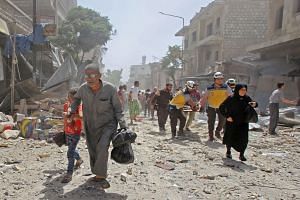 Since late April, 790 civilians have been killed in regime and Russian attacks, the Britain-based Syrian Observatory for Human Rights monitor says.

Fighting over the same period has claimed the lives of nearly 2,000 combatants, including 900 regime loyalists, according to the monitor.

More than 400,000 people have been displaced and dozens of hospitals and schools damaged since April, according to the UN.

The Syrian conflict has killed more than 370,000 people and driven millions from their homes since it started with the brutal repression of anti-government protests in 2011.