LONDON/BEIRUT (REUTERS) – Western powers will study “options” if Syria’s government again uses chemical weapons, but nothing is planned as yet, Britain’s foreign minister said on Sunday April 15), after raids on Syrian targets triggered heated debate over their legality and effectiveness.

US, French and British missile attacks struck at the heart of Syria’s chemical weapons programme on Saturday in retaliation for a suspected poison gas attack a week ago, although the restrained assault appeared unlikely to halt Syrian President Bashar al-Assad’s progress in the seven-year-old civil war.

The bombing, denounced by Damascus and its allies as an illegal act of aggression, was the biggest intervention by Western countries against Assad and his powerful ally Russia.

But the three countries said the strikes were limited to Syria’s chemical weapons capabilities and not aimed at toppling Assad or intervening in the civil war.

Speaking on British television, British Foreign Secretary (Minister) Boris Johnson threw his weight behind Prime Minister Theresa May’s decision to take part in the attack, saying it was the right thing to do to deter further use of chemical weapons.

“There is no proposal on the table at the moment for further attacks because so far thank heavens the Assad regime have not been so foolish as to launch another chemical weapons attack,” he told the BBC’s Andrew Marr show.

“If and when such a thing were to happen, then clearly with allies we would study what the options were.”

His comments appeared in line with those of US ambassador to the United Nations, Nikki Haley, who said at an emergency meeting of the UN Security Council that Trump told her that if Syria uses poisonous gas again, “The United States is locked and loaded.”

The Western countries said the strikes were aimed at preventing more Syrian chemical weapons attacks after a suspected poison gas attack in Douma on April 7 killed up to 75 people. They blame Assad’s government for the attack.

But British opposition leader Jeremy Corbyn said that the legal basis used to support the British role was debatable, adding that he would only support action backed by the United Nations Security Council.

“I say to the foreign secretary, I say to the prime minister, where is the legal basis for this?” Corbyn said.

“The legal basis ... would have to be self-defence or the authority of the UN Security Council. The humanitarian intervention is a legally debatable concept at the present time,” he said in an interview with the BBC on Sunday.

In Damascus, Assad told a group of visiting Russian lawmakers that Western missile strikes on his country were an act of aggression, Russian news agencies reported.

The agencies quoted the lawmakers as saying Assad was in a “good mood” and had praised the Soviet-era air defence systems used by Syria to help to repel the Western attacks. 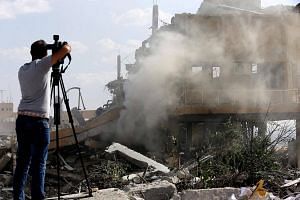 US strikes leave Syrian peace process right where it was

US President Donald Trump called the operation a success.

He proclaimed on Twitter: “Mission accomplished,” echoing former President George W. Bush, whose use of the same phrase in 2003 to describe the US invasion of Iraq was widely ridiculed as violence there dragged on for years.

“We believe that by hitting Barzeh, in particular, we’ve attacked the heart of the Syrian chemicals weapon programme,” US Lieutenant-General Kenneth McKenzie said at the Pentagon.

However, McKenzie acknowledged elements of the programme remain and he could not guarantee that Syria would be unable to conduct a chemical attack in the future.

Syria released video of the wreckage of a bombed-out research lab, but also of Assad arriving at work as usual, with the caption “Morning of resilience”.

There were no immediate reports of casualties.

Late on Saturday Syria time, a large explosion was heard in a Syrian government-controlled area in a rural region south of Aleppo, according to the Britain-based war monitor, the Syrian Observatory for Human Rights. The Observatory said the cause of the explosion was unknown, as well as its target.

Russian and Iranian military help over the past three years has allowed Assad to crush the rebel threat to topple him.

The United States, Britain and France have all participated in the Syrian conflict for years, arming rebels, bombing ISIS fighters and deploying troops on the ground to fight that group. But they have refrained from targeting Assad’s government, apart from a volley of US missiles last year.

Washington described the strike targets as a centre near Damascus for the research, development, production and testing of chemical and biological weapons; a chemical weapons storage site near the city of Homs; and another site near Homs that stored chemical weapons equipment and housed a command post.

Inspectors from the global chemical weapons watchdog OPCW were due to try to visit Douma to inspect the site of the suspected gas attack. Moscow condemned the Western states for refusing to wait for their findings.

Russia, whose ties with the West have sunk to levels of Cold War-era hostility, denies any gas attack happened in Douma and even said Britain staged it to whip up anti-Russian hysteria.

Syria agreed in 2013 to give up its chemical weapons after a nerve gas attack killed hundreds of people in Douma. Damascus is still permitted to have chlorine for civilian use, although its use as a weapon is banned. Allegations of Assad’s chlorine use have been frequent during the war although, unlike nerve agents, chlorine did not produce mass casualties as seen last week.