"Near Ramadi, 29 air strikes struck 67 ISIL staging areas destroying two ISIL excavators, an ISIL armoured personnel carrier, and an ISIL vehicle," the US statement said, using another acronym for IS.

The strikes were conducted on Sunday, on the eve of a fresh ground operation launched by Iraqi forces to tighten the noose on IS in its bastions of Ramadi and Fallujah, Anbar's two main cities.

Government forces had resisted IS attacks in the provincial capital for almost a year and a half before retreating in the face of a three-day blitz by the jihadists in mid-May. 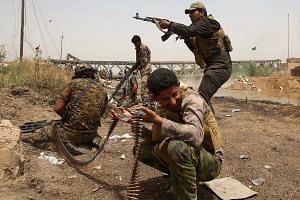 More than 10,000 extremists killed in coalition raids: US

The fall of Ramadi, which lies on the Euphrates river about 100 km west of Baghdad, was a huge blow to the government, which vowed to swiftly recapture it.

The coalition has conducted more than 5,200 strikes since it launched an air campaign against IS almost a year ago.

Twenty-nine is an unusually high number of strikes for a single day and a single area.

A total of 38 strikes were conducted in Iraq on Sunday, including several in other parts of Anbar, the statement said.