WASHINGTON (REUTERS) - The United States is halting refueling of aircraft from the Saudi-led coalition engaged in Yemen, the United States and Saudi Arabia said on Friday (Nov 9), ending one of the most divisive aspects of US assistance to the Saudi war effort.

Saudi Arabia, in a statement released by its embassy in Washington, said it had decided to request an end to US aerial refueling for its operations in Yemen because it could now handle it by itself.

US Defense Secretary Jim Mattis backed the decision and said the US government was consulted.

The move comes at a time of international outrage over the murder of US-based Saudi journalist Jamal Khashoggi, and after Democratic and Republican lawmakers threatened to take action in Congress next week over the refueling operations.

Critics of the Saudi campaign - including Democrats who won control of the House of Representatives in elections on Tuesday - have long questioned US involvement in the war, which has killed more than 10,000 people, displaced more than 2 million and led to widespread famine in Yemen since it began in 2015.

"I've been calling for this for over three years," said Representative Ted Lieu, a Democrat from California.

"We shouldn't be supporting coalition war crimes and I look forward to continuing to scrutinise the US' role in Yemen when we're in the majority next Congress."

Even as President Donald Trump's administration has condemned Khashoggi's murder, the White House has sought to preserve its relationship with Saudi Arabia.

A coordinated decision by Washington and Riyadh to halt the refueling could be an attempt by both countries to forestall further action by Congress.

Senators Todd Young, a Republican, and Jeanne Shaheen, a Democrat, had warned the Trump administration was running out of time to act.

"If the administration does not take immediate steps... we are prepared to take additional action when the Senate comes back into session," Young and Shaheen said.

Beyond refueling, the United States provides limited intelligence support to the Saudi-led coalition and sells it weaponry used in Yemen's war.

He also suggested plans to build up Yemeni troops.

"The US and the Coalition are planning to collaborate on building up legitimate Yemeni forces to defend the Yemeni people, secure their country's borders, and contribute to counter Al Qaeda and ISIS efforts in Yemen and the region," Mattis said in a statement.

Earlier this year, Mattis had defended US military support to Saudi-led coalition forces in Yemen, when lawmakers weighed forcing the Pentagon to end Washington's involvement. 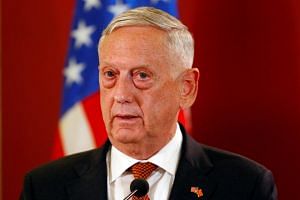 Mattis calls for Yemen ceasefire, peace talks within 'next 30 days'

Mattis argued that halting US military support could increase civilian casualties, since US refueling had given pilots more time to select their targets. He told them cutting off support could jeopardize cooperation on counter-terrorism and reduce American influence with Saudi Arabia.

Mattis also argued it would embolden the Iran-aligned Houthi rebels, who have fired missiles at Saudi Arabia and targeted commercial and military vessels off Yemen's coast.

Still, a halt to refueling could by itself have little practical effect on the war. US officials told Reuters only a fifth of Saudi-led coalition aircraft require in-air refueling from the United States.

In recent weeks, Mattis has appeared to voice a growing sense of urgency toward ending the conflict. At the end of October, Mattis joined US Secretary of State Mike Pompeo in calling for a ceasefire.

United Nations Yemen envoy Martin Griffiths is aiming to convene the country's warring parties for peace talks by the end of the year.

Saudi Arabia, in its statement, said its coalition was hopeful that UN-sponsored negotiations would lead to a negotiated settlement and "an end to the aggression by the Iranian backed Houthi militias' against the Yemeni people and countries in the region."