DEIR EZZOR PROVINCE, SYRIA (REUTERS) - US-backed fighters besieging the last shred of Islamic State in Iraq and Syria (ISIS) territory in eastern Syria said on Tuesday (March 19) they had captured 157 mostly foreign fighters as they tracked efforts by Islamists to escape the enclave.

"Our units monitored a group of terrorists, trailed them and captured 157 fully militarily equipped terrorists," a statement by the Syrian Democratic Forces (SDF) militia said.

ISIS's Baghouz pocket is tiny, wedged between the Euphrates river and a row of hills at the Iraqi border. It is crammed with vehicles and makeshift shelters and pummelled at night by artillery and air strikes.

It is the last populated area remaining with ISIS from the third of Syria and Iraq it suddenly seized in 2014 before its cruelties and attacks brought together local and foreign countries to push it back.

Neither he nor the SDF statement said when the capture took place.

Both the SDF and the US-led coalition that backs it have said the remaining ISIS militants inside the Baghouz pocket are among its most hardened foreign operatives. 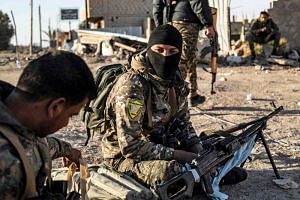 Over the past two months, more than 60,000 people have poured out of the group's dwindling enclave, nearly half of whom were surrendering supporters of ISIS, including some 5,000 fighters.

However, while the capture of Baghouz will mark a milestone in the battle against ISIS, regional and Western officials say the group will remain a threat.

Some of its fighters are holding out in the central Syrian desert and others have gone underground in Iraq to stage a series of shootings and kidnappings.

Nobody knows how many remain inside the last scrap of ground. Reuters footage of the encampment on Monday showed large explosions there and smoke billowing overhead with the sound of gunshots.

On Monday night, ISIS released an audio recording of its spokesman, Abi al-Hassan al-Muhajer, saying the group would stay strong.

"Do you think the displacement of the weak and poor out of Baghouz will weaken the Islamic State? No," he said.