BEIRUT (Reuters, AFP) – A war monitor said Islamic State in Iraq and Syria (ISIS) regained control over most of the industrial district in Syria’s Raqqa on Friday (June 30), but the alliance fighting it denied that while acknowledging there was an extremist counter attack in the east of the city.

The assault marked ISIS’s first sustained effort to fight back against the slow advance into Raqqa by the Syrian Democratic Forces (SDF).

The SDF, a US-backed alliance of Kurdish and Arab groups, took the industrial district this month in its biggest gain so far in ISIS’s Syrian capital of Raqqa.  It said on Friday that there had been heavy clashes since late Thursday in east Raqqa, where the industrial district is located, in the areas of al-Rawdha, al-Nahdha and al-Daraiyah. 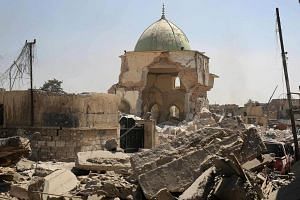 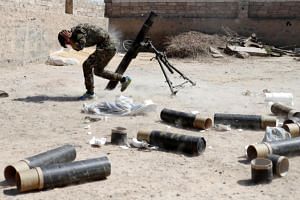 In Pictures: Syrian Democratic Forces cut off escape route for ISIS in Raqqa

Advances and setbacks: A timeline of key ISIS battles in Iraq and Syria

However, the Syrian Observatory for Human Rights, a Britain-based war monitor, said ISIS had regained control over most of the industrial area in fierce fighting.  The SDF, on its social media feed, acknowledged there had been intense clashes, but added the whole industrial district was still in its hands and the attack had been thwarted.

On Thursday, the Observatory said the SDF had managed to take the last stretch of the Euphrates’ south bank opposite Raqqa, completely encircling ISIS inside the city.

Since all Raqqa’s bridges were already destroyed, and the US-led coalition was striking boats crossing the river, the city had already been effectively isolated since May.

Naser Haj Mansour, a senior SDF official, told Reuters on Thursday he thought it could be “maybe more than a month or a month and a half” before the group took the city. Previous SDF timescales for its war on ISIS have proven optimistic.

Beyond Raqqa, ISIS still retains most of the 200km (130 mile) stretch of the Euphrates valley flowing to the border with Iraq. The Syrian army still holds a big enclave in Deir al-Zor, the area’s largest city, on which it is slowly advancing from the direction of Palmyra.

Several dozen militants disguised in SDF uniforms launched an attack from the city centre, which they still control, on two districts in the southeast of the city.

"Even totally besieged, militants are able to carry out operations," he added.

ISIS overran Raqqa in mid-2014 as part of the offensive that saw it seize control of large parts of Syria and Iraq.

The city became infamous as the scene of some of the group's worst atrocities, including public beheadings, and is thought to have been a hub for planning attacks overseas.

The United Nations estimates some 100,000 civilians remain in the city, with the militants accused of using them as human shields.

The biggest fall was in the first six months of 2017, when ISIS lost around 24,000 square kilometres of territory.

"Three years after the 'caliphate' was declared, it is evident that the group's governance project has failed," Strack said.

The White House envoy to the coalition, Brett McGurk, visited one of the recaptured areas on Thursday, meeting with local officials in the northern Syrian town of Tabqa.

ISIS militants were ousted from Tabqa and an adjacent dam on May 10 during the SDF offensive around Raqqa.

The visit came a day after McGurk met with members of the Raqa Civil Council, the body expected to run the northern city after ISIS's expected fall there.