AFRIN (Syria) • Turkish-backed rebels have seized the centre of Afrin city in northern Syria, Ankara said yesterday, as they made rapid gains in their campaign against Kurdish forces.

"Units of the Free Syrian Army, which are backed by Turkish armed forces, took control of the centre of Afrin," said President Recep Tayyip Erdogan, who has vowed to oust Kurdish militia from areas along the Turkish border.

"Most of the terrorists have already fled with tails between their legs. Our special forces and members of the Free Syrian Army are cleaning the remains and the traps they left behind," Mr Erdogan said. "In the centre of Afrin, symbols of trust and stability are waving instead of rags of terrorists," he added, referring to Turkish and Free Syrian Army flags that had been raised in the town centre.

The Syrian Observatory for Human Rights, a Britain-based monitor of the war, said Turkish-led forces had made a lightning advance inside Afrin, taking control of half the Kurdish-majority city.

A civilian inside Afrin said that rebels had deployed in the city centre and that the Kurdish People's Protection Units (YPG) militia had withdrawn. Civilians hiding in basements could hear fighting outside and people shouting "God is greatest", one resident told AFP.

Turkish forces and their Syrian rebel allies also damaged and tore down a statue linked to Kurdish culture in the city centre, a statement on a WhatsApp group run by the Kurdish-dominated Syrian Democratic Forces said.

The statue was of the blacksmith Kawa, a central figure in a Kurdish legend about the new year celebration of Nawroz. The statement said this was the "first blatant violation of Kurdish people's culture and history since the takeover of Afrin". 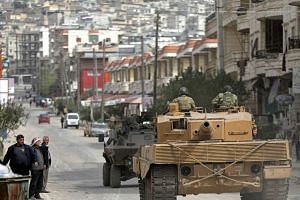 The capture of Afrin would be a major victory in Turkey's campaign against the YPG, which Ankara considers a terrorist group. Ankara launched Operation "Olive Branch" in Afrin two months ago, saying the area near the Turkish border needed to be secured and the YPG pushed out.

At least 200,000 civilians had fled the city over the last week, the Observatory said.

Turkish jets and artillery have been battering Afrin for weeks and ground clashes intensified in recent days, raising fears for thousands of civilians trapped in street-to-street fighting.

At least 27 civilians were killed in Turkish bombing last Friday and Saturday, said the Observatory.

Syria's civil war entered its eighth year last week with heavy fighting on two fronts - around Afrin and in the rebel enclave of eastern Ghouta, near Damascus.