ANKARA (REUTERS) - Turkish President Recep Tayyip Erdogan on Sunday (March 10) accused International Women's Day protesters of being led by political rivals and of "disrespect" during the Islamic call to prayer, after Friday's march was broken up by police firing tear gas.

Thousands of people took to the streets of Istanbul on Friday in defiance of a ban by authorities, crowding the famous Istiklal avenue, before a police crackdown brought the demonstration to a chaotic end.

In his comments on Sunday, Erdogan referenced an unverified viral video showing women and men continuing to chant during the call to prayer.

"A group which came together in Taksim led by the (main opposition Republican People's Party) CHP and (pro-Kurdish Peoples' Democratic Party) HDP supposedly for women's day behaved rudely with whistling and chanting during the call to prayer," Erdogan said.

The avenue is close to Taksim square, a traditional rallying point.

The president has been holding daily rallies across the country and often slamming the opposition ahead of local elections on March 31. He has accused the CHP of being in an alliance with the HDP, which Erdogan says is a political front for Kurdish insurgents.

The "March 8 Feminist Night march" group issued a statement on Sunday decrying the attempt to use Friday's rally as "election material" in the press and on social media. 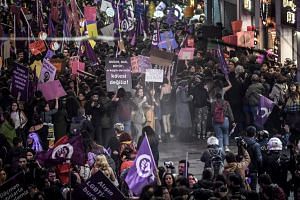 "Police violence against tens of thousands of women taking part/trying to take part in the night march cannot be covered up with polarising language... fake news and hate," the group said, without making any direct reference to Erdogan.

In his statement the Turkish leader also played a short clip of the video as well as footage of an opposition rally from 2011 and said that participants did not carry the Turkish flag.

"(The opposition is) attacking our liberty and our future with this disrespect to our flag and our call to prayer," he said during a rally in the southern city of Adana.

Erdogan often says that his Islamic-rooted party has given greater freedom to Muslims in Turkey where until a few years ago, women were banned from wearing the Islamic headscarf, known as the hijab, in state institutions and universities.

But he has been accused by critics of eroding the secular pillars of modern Turkey.

The call to prayer has been at the centre of controversy in the Turkish republic since its foundation in 1923.

Most recently in 2018, there was a row after CHP MP Ozturk Yilmaz called for it to be in Turkish rather than Arabic.