ANKARA (AFP) - Turkey on Tuesday (Oct 4) suspended more than 12,000 police officers over alleged links to Muslim cleric Fethullah Gulen, accused of masterminding the failed July coup, in the latest move under a controversial state of emergency.

Meanwhile, a prominent pro-Kurdish television channel was raided and broadcasts cut under the emergency laws, over accusations of supporting Kurdish militants.

Of the 12,801 police officers suspended from duty as part of the investigation into the coup attempt, 2,523 were police chiefs, the police headquarters said in a statement.

In total, Turkey has suspended around 270,000 police officers. 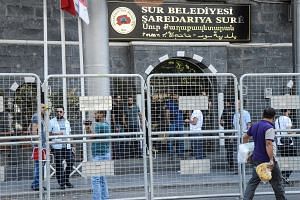 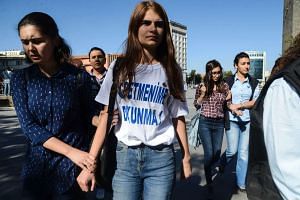 The action was taken over suspected links to the Gulen movement which Turkey blames for the failed putsch on July 15 that tried to oust President Recep Tayyip Erdogan from power.

A few days after the coup attempt, a three-month state of emergency came into force and was extended on Monday (Oct 3) a further 90 days from Oct 19.

A Turkish official, who did not wish to be named, confirmed the suspension, adding that the individuals would continue to be paid two-thirds of their salary "pending further investigation".

Mr Gulen, an ally-turned-foe of Mr Erdogan who has lived in self-imposed exile in the United States since 1999, strongly denies Ankara's accusations.

Supporters of the Gulen movement, also known as Hizmet (service), insist it is a loose grouping of individuals committed to peace and helping people through education and charities.

Turkey has asked the US authorities to extradite Mr Gulen to face justice back home and expressed impatience with the slowness of the procedure.

But Washington has insisted the full judicial process should be observed.

According to Anadolu, 1,350 of those suspended in the police force were working at the Ankara police headquarters, which came under attack from the air on the night of the coup.

The interior ministry also suspended 37 members of its staff over alleged links to the movement, CNN-Turk television reported. At least 369 had already been suspended from the ministry by early September, according to previous figures from the channel.

In the central city of Konya, 21 soldiers were detained in connection with the investigation at an air base where putschists had previously clashed with Turkish security forces while resisting arrest on July 17, two days after the attempted coup.

Tens of thousands of people in the judiciary, civil service, military and education sector have been suspended while 32,000 suspects have been placed under arrest on charges of links to to the movement.

A total of 70,000 people had been investigated, Mr Bozdag said last month, adding that the "process" continued.

From teachers to former generals and admirals, from bakery magnates to journalists, the investigation into the failed putsch has touched almost all aspects of Turkish life.

Also under the state of emergency, Turkish police raided the Istanbul headquarters of prominent pro-Kurdish television channel IMC TV, cutting all transmissions while it was live on air.

However, the channel is not accused of supporting the coup, but of broadcasting "terror propaganda" for the outlawed Kurdistan Workers' Party (PKK). It has ridiculed the charges.

The government's crackdown has alarmed Turkey's Western allies, including the European Union, which have warned Ankara that it must act within the rule of law.

The Turkish official said there had been "many cases" where suspended individuals were now reinstated, but could not give an exact figure. "A suspension is a precautionary measure intended to stop suspects interfering with the official investigation, destroying evidence, etc."

Prime Minister Binali Yildirim said those found guilty would face punishment "no matter who they were" during a speech to Parliament in Ankara. "(But) we will never allow those who are innocent to face any grievances."

The decision to extend the state of emergency by three months was announced on Monday after a Cabinet meeting.

Mr Erdogan previously suggested that it might be necessary for the state of emergency to be kept for at least 12 months. Turkish officials have defended the extension as a necessary means to address challenges to the country's democracy.