ANKARA (REUTERS) - One Turkish soldier was killed and another was wounded on Sunday (Oct 20) after an attack by the Syrian Kurdish YPG militia in north-east Syria's Tel Abyad, the defence ministry said, despite a deal to pause military operations as militants withdraw from the area.

President Recep Tayyip Erdogan agreed with the United States last Thursday, in talks with US Vice-President Mike Pence, to a five-day pause in the offensive to allow time for the Kurdish fighters to withdraw from a “safe zone” that Turkey aims to form in north-east Syria near its border.

On Saturday, the truce was holding along the border, with just a few Turkish military vehicles crossing, a Reuters reporter at the scene said. But Sunday’s attack has underlined how fragile the agreement is.

Ankara regards the YPG, the main component of the Kurdish-led Syrian Democratic Forces (SDF), as a terrorist group because of its links to Kurdish insurgents in south-east Turkey.

The YPG has been a close US ally in the fight against the Islamic State in Iraq and Syria terror network.

In a statement, the defence ministry said an attack by the YPG with anti-tank and light weapons had struck Turkish soldiers carrying out a reconnaissance and surveillance mission in Tel Abyad on Sunday.

“The immediate response based on self-defence was given,” the ministry said. “Despite the Safe Zone Agreement with the United States... 20 harassment or violations were committed by PKK (Kurdistan Workers' Party) or YPG terrorists.”

Last Friday, the Kurdish militia accused Turkey of violating the five-day pause by shelling civilian areas in the north-east and the border town of Ras al Ain.

A senior Turkish official later dismissed the accusations on Saturday, saying these were an attempt to sabotage the agreement between Ankara and Washington, and that Turkey fully supported the deal. 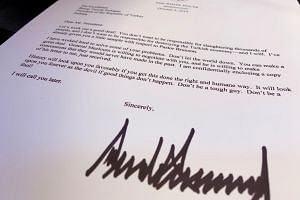 Turkey says it is preparing retaliatory sanctions against US

President Erdogan warned on Saturday that the offensive would continue and Turkey would “crush the heads of terrorists” if the deal was not fully implemented, while Turkey has insisted that it is the duty of Washington to ensure the withdrawal of the YPG.

Turkey’s defence ministry said late on Saturday that it was closely monitoring the withdrawal of the YPG and that it was in close contact with US officials over the issue and to provide logistical information.

Turkey aims to establish a “safe zone” some 32km into Syria. Mr Erdogan said last Friday it would run for some 440km along the border, though the US special envoy for Syria said the accord covered a smaller area where Turkish forces and their Syrian rebel allies were fighting.

Mr Erdogan also said last Friday that Turkey would set up a dozen observation posts across north-east Syria, and that he would hold talks with Russian President Vladimir Putin on what steps to take in the planned “safe zone” next week.