In a major twist for Syria's complex seven-year war, pro-regime fighters on Tuesday (Feb 20) entered the north-western Afrin region to help a Kurdish militia fend off a Turkish assault in the Kurdish-controlled enclave.

For a month now, Turkey has been waging an air and ground offensive in Afrin against the Kurdish People's Protection Units (YPG) militia, which it sees as a big security threat on its border with Syria.

Tuesday's confrontation risks a further escalation of the increasingly complex situation in northern Syria where Kurdish groups, the Syrian government, rebel groups, Turkey, the United States and Russia are all tangled in a web of enmities and alliances.

Here is a closer look at the conflict.

The Kurds are a non-Arab ethnic group who mainly live across four countries without a state of their own.

Numbering between 25 million and 35 million, they inhabit the mainly mountainous regions spanning south-east Turkey through northern Syria and Iraq to central Iran.

There are more than two million Kurds in Syria (15 per cent of the overall population), while there are around 12 million to 15 million Kurds (about 20 per cent) in Turkey. 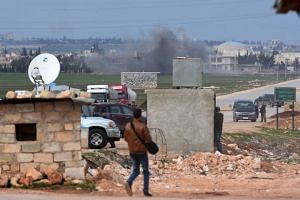 Six million Kurds live in Iran (less than 10 per cent) and between five million and six million in Iraq (15 to 20 per cent).

The Kurds have never lived under a single, centralised power and are split among a myriad of parties and factions.

WHY IS TURKEY WAGING AN OFFENSIVE IN AFRIN?

Located in Syria's northern province of Aleppo, Afrin has been controlled by the YPG militia since Syrian government forces withdrew from Kurdish-majority areas in the country's north in 2012.

The YPG militia are backed by the United States and are seen as one of the most effective forces against the Islamic State in Iraq and Syria (ISIS) militant group. The Kurds have also been an important ally of the US in Iraq.

Turkey, however, says the YPG is a "terrorist" offshoot of the Kurdistan Workers' Party (PKK), which has waged an insurgency in south-eastern Turkey since 1984.

The PKK has been listed as a terrorist organisation by Turkey, the US, and the European Union. The fight between the PKK and Turkish forces has continued for more than 30 years and killed more than 40,000 people.

The Washington-based Brookings think tank in a blog post on its website last week noted that "Turkey sees its own national security threatened by the prospect of an emerging Kurdish region along its border that is governed by Syrian Kurds closely aligned with the PKK".

Turkey began its cross-border offensive dubbed Operation Olive Branch on Jan 20. According to the Syrian Observatory for Human Rights, a war monitor, Syrian rebels and Turkish forces have taken 35 villages since the start of the operation.

WHY ARE PRO-SYRIA FORCES HELPING THE KURDISH MILITIA?

Syrian President Bashar al-Assad has denounced the Turkish offensive, citing it as an example of Ankara's support for extremist rebel groups.

But while the pro-government forces involved in Tuesday's confrontation included militias allied to Assad, the Syrian army itself was not involved.

The YPG spokesman Nuri Mahmud said on Tuesday the Kurdish militia had called on the Damascus government to help fend off Turkey's assault.

The move by the pro-regime forces came after a Kurdish official said on Sunday that a deal had been struck with the Syrian army to help Kurdish forces there.

Turkish President Recep Tayyip Erdogan previously said that he had agreed with Russia and Iran - two of Assad's main international backers - to block Syrian government support for the YPG fighters.

Negotiations have been ongoing for a potential return of government-affiliated forces to the Kurdish-controlled enclave.

Despite the apparent cooperation between the pro-Syrian forces and the Kurdish militia, ties between the two are complicated as the Kurds wish to seek autonomy in the regions they hold, a desire that runs counter to Assad's aim of controlling all of Syria.

Kurdish political leaders have said they had no choice but to turn to Assad-allied militia because no foreign power was willing to help them against Turkish forces in Afrin.

WHAT IS THE IMPACT OF THE CONFRONTATION ON THE SYRIAN WAR?

Syria's conflict erupted in 2011 with protests against Assad, but the ensuing war has carved the country into various zones of control among rebels, militants, the regime, and the Kurds.

With Russian and Iranian backing, Syrian government forces have recovered large swathes of territory from rebel factions and ISIS militants over the past year.

Turkey, which has been fiercely opposed to Assad and supports the rebels fighting to overthrow him, has recently been working with his allies Russia and Iran for a political resolution to the conflict.

As such, the move by the pro-regime forces to support the Kurds threatens to unravel months of those diplomatic efforts.

It also signals a new phase of the war with a greater potential for military engagements between other countries with a stake in the outcome, among them Turkey, Iran and the US.

Brookings noted last week that "Ankara sees the the US policy of supporting Syrian Kurdish militants against ISIS as a serious affront since the Turkish government makes no distinction between the Kurdish militia in Syria and the Kurdish Workers' Party".

"This situation risks bringing Turkey and the United States into a military confrontation, unheard of in their 70-year long alliance."

US Secretary of State Rex Tillerson has said he recognises Turkey's legitimate right to defend its borders, but has called on Ankara to show restraint in the Afrin operation and avoid actions that would escalate tensions in the area.

Meanwhile, it remains to be seen whether the Turkish and Syrian militaries will be drawn into direct confrontation for the first time during Syria's civil war.