PARIS (AFP) - As negotiators meet in Vienna on Thursday (Jan 25) for two days of UN-backed talks over ending Syria's bloody war, Western diplomats are ratcheting up the pressure for a solution - even as Russia pushes its own round of peace talks.

French Foreign Minister Jean-Yves Le Drian said on Wednesday that the Vienna meeting, after several failed rounds held in Geneva, was the "last hope" for reaching a political solution.

But Russian President Vladimir Putin has been waging a parallel diplomatic offensive, with a new round of talks at the Black Sea resort of Sochi set for Jan 30.

Ahead of the Vienna meeting, officials from the United States, France and Britain, along with Saudi Arabia and Jordan, gathered in Paris on Tuesday to sharpen their response to the Russian initiative.

"The United Nations has to be put back in the middle of the game. There is no question of letting the Geneva process be hijacked, diverted or bypassed," a French diplomatic source said.

In Vienna, representatives of the Syrian government as well as opposition groups are meeting once again for UN-led talks after the latest failed round in December.

But at least the opposition presented a united front at that meeting, though representatives from Mr Assad's government have refused to meet the opposition directly until they drop demands that he leave office.

Hoping to extract some progress in Vienna, where the talks have been moved for this round for logistical reasons, UN envoy Staffan de Mistura has put the subject of a new Constitution on the agenda, avoiding the trickier subject of elections.

Next week, though, Russia will host its Syrian National Dialogue Congress, to which both representatives of Syrian civil society as well as Kurds have been invited.

Two months ahead of Russia's presidential vote, Mr Putin is hoping to show a foreign policy victory after securing a Syria military victory on the ground.

"Russia is going to present in particular its project for a new Syrian Constitution," said Mr Azhdar Kurtov, an analyst at the Russian Institute for Strategic Studies (RISS).

Moscow says the goal of the Sochi talks, brokered alongside Iran and Turkey, is to "efficiently" sustain the UN-backed talks with concrete "results".

The talks follow the Astana meetings in Kazakhstan which led to four "de-escalation zones" agreed under a deal last year between rebel backer Turkey and regime allies Iran and Russia.

But Syrian opposition leaders, who haven't yet said if they will go to Sochi, doubt Moscow's intentions - and some even worry their security is at risk.

"Bring elders, Kurds in local outfits, et cetera, that makes a nice photo, but it doesn't guarantee that their representatives will be there," a European diplomatic source said.

Washington, which has largely been absent in the peace process under President Donald Trump, has signalled a shift in recent weeks.

"America wants to play the Syria card in its dealings with Russia and to respond to the growing influence of the Iranians," said Mr Hasni Abidi, director of the Cernam centre for Arab studies in Geneva. 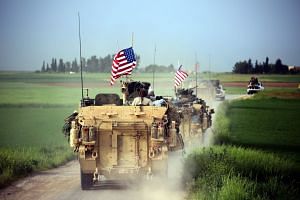 The US now says it will keep its roughly 2,000 soldiers in Syria to counter Iran's influence and until Mr Assad is no longer in power.

"A conflict of interests between Moscow and Washington is inevitable. Each will obviously try to minimise the role of the other in ending the crisis," said Mr Kurtov.

"What's certain is that the ability of Russia to bring the Syrian regime to the negotiating table will be tested in Vienna," a European diplomatic source said.

It's unclear, however, if Mr Assad, having retaken Aleppo in 2016, will want to negotiate, especially if he feels confident of winning back Idlib, the last major province held by rebel forces.

Diplomats also note that Teheran has little to gain from a political resolution.

But risks for Syria remain, as seen by Turkey's incursion into the country to pursue Kurdish rebels it considers a terrorism risk.

"Russia's prestige will depend on how this process evolves, and only the UN can provide legitimacy for any deals that are reached."