SANAA/DUBAI/GENEVA (REUTERS) - A Saudi-led Arab military coalition said on Friday (Aug 10) it would investigate an air strike that killed dozens of children in Yemen, an apparent shift of stance on an attack Riyadh has portrayed as a legitimate action against its Houthi foes.

At least 40 children were killed in Thursday's strike on a bus in northern Yemen, the armed Houthi group which controls Yemen's capital said. That raised the toll of children killed in the raid from 29.

People in Saada started to dig graves in preparation for funerals to be held on Saturday.

"God may give us patience," said Hussein Hussein Tayeb, who lost three sons on the bus, on a trip with other pupils to visit a mosque and tombs.

"I was one of the first to arrive on the scene, seeking to rescue the wounded; I lifted a body and I found that it was Ahmed's face. I hugged him, he was my son."

Ahmed was 11. His brothers Yusef and Ali were 14 and nine. 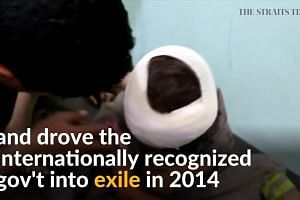 At least 29 children killed in strike on Yemen bus

UN chief Antonio Guterres called for an independent investigation of the raid which hit the bus as it drove through a market in Dahyan, a town in the Houthis' home province of Saada.

The UN Security Council on Friday called for a "credible and transparent" investigation after receiving a closed-door briefing on the strike by a senior UN official.

A Reuters TV crew saw boys injured in the strike lying on beds in the Dahyan hospital, many with their heads wrapped. The face of one was covered in lacerations.

The Arab states carried out new air strikes on Friday, killing a girl and injuring several other people whose home was targeted in Marib province, east of the capital Sanaa, the Houthis' al-Masirah TV said.

Announcing the investigation into the strike on the bus, the Saudi Press Agency quoted an alliance official as saying: "The coalition is firmly committed to investigating all claims regarding mistakes or violations of international law, to sanction those who caused these incidents and to provide assistance to the victims."

The Saudi-led Arab alliance, whose members receive Western political support and buy billions of dollars a year in arms from the United States, Britain and France, has been fighting for three years to drive out the Houthis, Iran-aligned fighters who pushed a Saudi-backed government out of the capital in 2014.

Yemen is the poorest country in the Arabian peninsula, and the United Nations says the war has created the world's most urgent humanitarian disaster, with millions of people totally dependent on aid and at risk of famine if supply lines are cut.

The Arab states initially said the air strikes on the bus were "legitimate military action" against missile launchers, carried out in accordance with international humanitarian law.

Houthi-run al-Masirah TV cited the group's health minister Taha Mutawakil as saying that the estimated number of casualties stood at 51 killed including 40 children, and at least 79 people wounded, of whom 56 were children.

Watch this video and share it to the world:
This child was happy with his new #UNICEF BAG, but #Saudi led coalition targeted his school bus today and killed\injured dozens of his classmates in a local market in Dahian area #Saada #Yemen.#Stop_killing_Yemeni_Children. pic.twitter.com/mzCfFlHsBN

The U.S.-backed, Saudi-led coalition in Yemen just bombed a bus filled with children.

Many of the dead and wounded are under the age of 10, @ICRC says. pic.twitter.com/sJAGU2Tho4

Following an attack this morning on a bus driving children in Dahyan Market, northern Sa’ada, @ICRC_yemen- supported hospital has received dozens of dead and wounded. Under international humanitarian law, civilians must be protected during conflict. pic.twitter.com/x39NVB8G4p

The International Committee of the Red Cross reported the same toll on Friday, citing authorities in Saada. It had said on its Twitter account on Thursday that its medical team at the ICRC-supported hospital in Saada had received the bodies of 29 children, all under 15 years old. The hospital also received 48 wounded people, among them 30 children.

In Paris, the French foreign ministry said France condemned the strike and backed a UN call to bring all parties in the war together for talks in Geneva on Sept 6.

The Houthis have however barred without explanation the head of the UN's human rights office in Yemen from returning to the country, a UN spokeswoman said on Friday.

Elobaid Elobaid, a Canadian citizen, had been based in Yemen since October 2016, leading 17 staff in Sanaa and 13 monitors in 11 of Yemen's governorates. His visa expired in June but was not renewed.