The King issued a royal order that promoted 26 judges and appointed 30 others at different levels of the judiciary, SPA said.

The Saudi authorities have arrested dozens of members of the royal family, officials and businessmen in the anti-graft purge that began on Saturday. They face allegations of money laundering, bribery, extortion and exploiting public office for personal gain.

Saudi Arabia's attorney-general said yesterday that 208 people have been called in for questioning in the sweeping investigation, and seven of them had been released without charge. "Based on our investigations over the past three years, we estimate that at least US$100 billion (S$136 billion) has been misused through systematic corruption and embezzlement over several decades," Sheikh Saud al-Mojeb said in a statement.

It was unclear if the judges will have any role in the widening crackdown.

The UAE central bank has made requests to commercial banks and finance firms in the UAE to provide details of the accounts of 19 Saudis, a possible prelude to freezing the accounts, commercial bankers who declined to be named said yesterday.

Almost all of the 19, including billionaire Prince Alwaleed bin Talal and former National Guard chief Prince Miteb bin Abdullah, are among those detained in the corruption inquiry.

Commercial bankers said UAE authorities had not explained why they wanted the information, but believed they were acting at the behest of the Saudi government.

Saudi Arabia has announced it will confiscate assets that had been improperly acquired, and while Riyadh has set no timetable for any confiscations, banking sources say more than 1,700 domestic bank accounts have already been frozen at the request of the central bank.

Commercial bankers said UAE authorities had not explained why they wanted the information, but believed they were acting at the behest of the Saudi government.

The UAE, particularly its most commercially prominent emirate Dubai, is one of the main places where wealthy Saudis park their money. In addition to bank accounts, they buy luxury apartments and villas in Dubai and invest in its volatile stock market.

Some wealthy Saudis have been liquidating assets within Saudi Arabia, the UAE and other Gulf countries this week, apparently in a bid to move money out of the region and escape the crackdown, private bankers and fund managers said.

In Riyadh, rich investors have been selling equities heavily, although buying by state-linked funds has helped to support the market. In Dubai, shares in real estate developers have sunk as investors worry about the impact of a pullout by Saudis on the property market .

The risk of the accounts being frozen "jeopardises Dubai's pitch as a private banking centre", said a Gulf-based banker, adding: "Banks in the UAE are full of Saudi money."

One senior banker at an international bank with business in Saudi Arabia said his institution had already frozen some accounts, both inside the kingdom and outside it, in response to Saudi government requests. 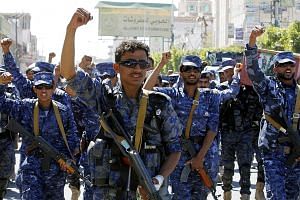