WASHINGTON (AFP) - Saudi Arabia's crown prince Mohammed bin Salman rounded off a weeks-long tour of the United States with a weekend in Texas, where he met on Saturday (April 7) with both former president Bushes.

George H.W. Bush, 93, tweeted a photo of the prince with his son, George W. Bush.

"A wonderful chance to celebrate the long-standing friendship between our two nations.", George Bush Senior wrote, while the Saudi embassy in Washington described the meeting as a "reminder of the strength and breadth of the long-standing Saudi-US partnership".

The prince - or MBS, as he is known - travelled with his plentiful entourage from the White House to Houston via Boston, New York, Seattle, Los Angeles and Silicon Valley, embarking on what one expert called a particularly well-planned public relations campaign.

But strengthening US-Saudi relations in the face of Iran was a priority for US President Donald Trump, who hailed the nations' "great friendship" as he met with the 32-year-old prince at the Oval Office on March 20.

Since that meeting, the prince has been diligently pushing his "Saudi Vision 2030" - a plan for a Saudi economy less reliant on oil and eager to attract US investors tempted by potential diversification.

The latter part of his trip saw him meet with directors of Google, Facebook and Palantir - not to mention Microsoft founder-turned-philanthropist Bill Gates and Richard Branson, with whom he talked space exploration.

The Saudi prince also enjoyed a Hollywood dinner with Rupert Murdoch, where they were joined by studio bosses and actors including Morgan Freeman, according to the Hollywood Reporter. 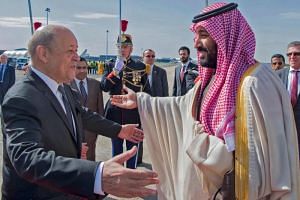 The meeting came ahead of the opening of Saudi Arabia's first cinema - managed by American AMC Entertainment - in Riyadh on April 18.

Then, it was off to Houston to meet with the Bushes, having already met with Bill Clinton in New York. In fact, in terms of former presidents, only Barack Obama - whose terms in office marked strained relations with Saudi Arabia - was left off the agenda.

Prince Mohammed is scheduled to arrive in Paris on Sunday (April 08) for an official visit on Monday and Tuesday - including dinner with President Emmanuel Macron Tuesday evening.

The trip to France is set to focus on cultural ties and investments as well as the war in Yemen, dubbed the world's worst humanitarian crisis.

Around 14 memorandums of understanding in energy, agriculture, tourism and culture are set to be signed between French and Saudi organisations, a source close to the crown prince's delegation told AFP.

A Franco-Saudi cooperation deal to develop Al Ula, a Saudi city richly endowed with archeological remnants, is also expected to be a central highlight of the visit, he added.

Aside from meetings with the French president, prime minister and trade officials, the heir to the Saudi throne is also considering a visit to the Paris-based tech startup campus Station F and a concert in southern Aix-en-Provence, the source said.

"This is not a traditional state visit," another source close to the delegation told AFP. "It is about forging a new partnership with France, not just shopping for deals."

Macron's office said the trip would also focus on investment in the digital economy as well as renewable energy, as the oil-rich kingdom invests billions of dollars in the sector in a bid to diversify.

"He is marketing Saudi Arabia as a strategic and business partner to the West and a force of stability in the region, as compared to rival Iran which he presents as a destabilising force," he added.

The Saudi prince set off on his international charm offensive in Egypt on March 4, before making his way to Britain and the US.

After France, his next stop is Spain.

"In public relations for him it was incredibly successful," Simon Henderson, an expert on Saudi Arabia at the Washington Institute, told AFP of the US trip.

A browse of the prince's Instagram account reveals dozens of photos of him, all smiles and often dressed down without a tie, accompanied by various business leaders.

He has overcome a challenge for a Saudi royal: to appear "an ordinary sort of person (...) by turning up in Starbucks for instance," Henderson added, referencing the prince's coffee run with former New York mayor Michael Bloomberg.

"The question which I'm fascinated by is: he clearly got the PR he wanted to here, and it played well here. But how did it play at home?" Henderson said.

But while it seemed a fruitful tour in terms of diplomacy, it has yet to be seen if it will pay off economically.

Indeed, it's not clear whether Prince Mohammed's pitch to invest in Saudi Arabia would convince US business leaders while his anti-corruption campaign targeted hundreds of princes, ministers and businessmen - a climate which makes identifying sustainable partners a tough task for Americans, according to Henderson.