RIYADH (REUTERS) - A Saudi court resumed on Wednesday (March 27) the trial of prominent women activists facing charges related to their human rights work and contacts with foreign journalists and diplomats, in a case that has sharpened Western criticism of the kingdom.

The women, including rights campaigner Loujain al-Hathloul, university professor Hatoon al-Fassi and blogger Eman al-Nafjan, were expected to respond to charges including some that rights groups say fall under an article of the kingdom's cyber crime law stipulating jail sentences of up to five years.

Western diplomats and media, including Reuters, were denied entry to the hearing and escorted from the building, despite petitioning the authorities to attend amid global scrutiny of the case.

Three dozen countries, including all 28 EU members, Canada and Australia, have called on Riyadh to free the activists.

British Foreign Secretary Jeremy Hunt and US Secretary of State Mike Pompeo both raised the issue during recent visits to Riyadh.

Nine prominent US senators wrote a public letter last week asking King Salman for the immediate and unconditional release of prisoners held on "dubious charges related to their activism", citing many of the women currently on trial.

It remains to be seen if Riyadh will bend to international pressure - with the women possibly receiving acquittals or pardons - or pursue harsh sentences in a case critics say has revealed the limits of Crown Prince Mohammed bin Salman's promises to modernise Saudi Arabia. 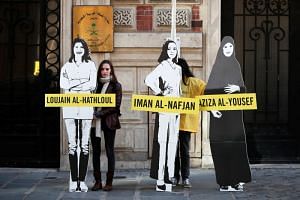 In Saudi Arabia, it's hard to delink reform from repression

The activists were detained weeks before a ban on women driving cars in the conservative kingdom was lifted last June under efforts to relax social rules and boost the economy.

Dozens of other activists, intellectuals and clerics have been arrested separately in the past two years in an apparent bid to stamp out possible opposition.

The crown prince has courted the West to support ambitious economic and social reforms, but his reputation was tarnished when Saudi agents killed journalist Jamal Khashoggi last October at the kingdom's Istanbul consulate, sparking an international furore.

The charges against Hathloul include communicating with 15 to 20 foreign journalists in Saudi Arabia, attempting to apply for a job at the United Nations, and attending digital privacy training, her brother told members of Congress this month.

The Saudi public prosecutor said last May that the women, along with several men, had been arrested on suspicion of harming Saudi interests and offering support to hostile elements abroad.

State-backed media labelled some of them as traitors and"agents of embassies", irritating Western allies.

Activists and diplomats have speculated that may have been meant as a message to activists not to push demands out of sync with the government's own agenda, but the crown prince has denied that, accusing the women of working for Qatari and Iranian intelligence.

Rights groups say some of the women have been held in solitary confinement and subjected to mistreatment and torture, including electric shocks, flogging and sexual assault. Saudi officials have denied those allegations.

The case was apparently moved from a high-security terrorism tribunal to the Riyadh criminal court at the last minute without explanation, possibly signalling a more lenient handling of the cases after months of lobbying by Western governments.