DUBAI (AFP) - Saudi Arabia has plans to dig a canal the length of its border with Gulf rival Qatar, to turn the peninsula into an island and further isolate it, according to the Saudi media.

"The project is to be funded entirely by Saudi and Emirati private sector investment - under full Saudi authority," Sabq Online Newspaper reported on Monday.

The planned "Salwa Canal" is to be dug by Egyptian companies, benefiting from the "Egyptian experience" in widening the Suez Canal, it said.

The blueprint - its details leaked in successive days in the Saudi press - has yet to elicit an official denial from Riyadh.

It is the latest twist in the 10-month Gulf crisis, which has pitted Saudi Arabia, the UAE, Egypt and Bahrain against Qatar.

Last June, Riyadh and its allies broke off relations with Doha, accusing it of fostering close links with Teheran and supporting Islamist extremists - a charge Qatar denies.

The boycott includes the closure of the small Gulf state's only land border with Saudi Arabia. 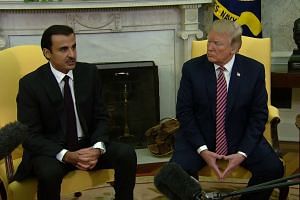 Donald Trump welcomes Qatari Emir in from the cold

"The canal project would appear to be an attempt to further tighten the blockade on Qatar and attempt to take trade away from the emirate," The New Arab, a Qatari-owned publication, said on Sunday.

Sabq said the blueprint - which it noted would be a boon for tourism, adding 60km to the Saudi coastline - was awaiting a "green light" from authorities.

The canal would measure 15-20m deep and 200m wide, allowing for the passage of merchant ships, it said.

Saudi Al-Riyadh newspaper went further, claiming the project includes plans for a dump which would be filled with waste from nuclear reactors which the kingdom and the UAE plan on building.