The leaders of Saudi Arabia and Kuwait want to collaborate more closely with Singapore as they open up and diversify their economies, said President Halimah Yacob.

Speaking to the Singapore media on Thursday about her first state visit to the Middle East, President Halimah said the vibes she felt during the meetings were "extremely positive", and the leaders looked at Singapore as a role model as the Republic has been very successful in its development efforts despite its small size.

"King Salman (of Saudi Arabia) raised the idea of having a joint commission," she shared. "He said we should have a joint commission in order to further our collaboration with each other, and I think that's a useful idea which we can further explore."

She highlighted that the two countries already have economic cooperation with Singapore in areas such as oil and gas, and financial services, as well as information and communications technology (ICT).

There has also been collaboration at the governmental level to create developmental opportunities, she added, citing the memorandum of understanding on environmental protection and water resources management that was signed with Saudi Arabia on Wednesday as one example.

"Apart from that, between Saudi Arabia and us, there's also a lot of interest in so many different areas, particularly now that Saudi Arabia has launched the Vision 2030," said President Halimah.

Vision 2030 is the Saudi reform programme to develop the education, healthcare, infrastructure, recreation and tourism sectors, and to prepare the economy for a post-oil era.

"There's a lot of focus on diversification in terms of tourism, fintech and ICT. These are areas that present opportunities for the private sector of the two countries."

She also noted that Singapore is the only country outside the Gulf states which has signed a free trade agreement with the Gulf Cooperation Council formed by six Arab states - Kuwait, Saudi Arabia, Bahrain, Oman, Qatar, and the United Arab Emirates. She said that "provides a source of impetus for trade and investment" with the two countries she visited. 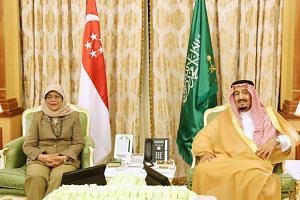 Lessons from religious studies in Kuwait should be contextualised to Singapore's diverse society: President Halimah

The issue of quota for Singaporeans allowed to perform the annual haj pilgrimage was raised by President Halimah in her meeting with King Salman on Wednesday. The quota was increased from 800 places in 2017 to 900 last year.

"We have a lot of pilgrims who are very keen to perform the haj, but are not able to because of the quota. So I asked King Salman and the government of Saudi Arabia to review the quota."

She also said that receiving the King Abdulaziz Medal - the highest civilian honour in Saudi Arabia - was unexpected and she felt deeply honoured. She stressed that the award is not just about her, but reflects "how much esteem and respect the Kingdom of Saudi Arabia has for Singapore, for what we stand for, our values, our efforts at progress and our ability to provide for the welfare of our people".

Madam Halimah also reiterated a point that she made on Sunday to Singaporean students pursuing Islamic religious studies in Kuwait: They need to tailor what they learn to Singapore's diverse society.

She said there are deep fault lines on race and religion appearing throughout the world, and Singaporeans have to be mindful of them, lest they disrupt our harmony and social cohesion. Such fault lines are sometimes due to "ideologies that are very extremist and very exclusive", she explained.

President Halimah's visit to Kuwait was Singapore's second state visit there, after then President S R Nathan made a trip in 2008.

She noted that Singapore and Kuwait are both small countries facing the same challenges. While plugging themselves into the global system and keeping themselves open, they have to constantly look for what they can offer to the rest of the world, so that others will find them valuable, whether economically or socially.

"The opportunities are immense, even for a small country. Small means you're a lot more nimble. We can turn around corners faster."