While Putin urged Erdogan and Iranian President Hassan Rouhani at a summit on Thursday (Feb 14) to work out ways to "completely destroy the terrorist hotbed" in the Idlib region, a joint statement after the talks referred only to the need for "concrete steps" to restore a September truce shattered by the Islamist takeover last month.

Those steps do not include military action, Kremlin spokesman Dmitry Peskov told reporters.

Erdogan said he had "relayed our expectations" to Putin and Rouhani for Syrian government forces to "abide by the cease-fire" agreed in September, and for Russia and Iran to support Turkey's demand for a buffer zone inside northern Syria to counter US-backed Kurdish fighters in the region.

Putin and Rouhani instead stressed the need for Syrian President Bashar al-Assad's government to have control over the territory.

The meeting in Russia's Black Sea resort of Sochi was the first between the three leaders since US President Donald Trump announced in December that he will pull out about 2,000 US troops from Syria.

The move would change the balance of forces on the ground and is fuelling tensions between Ankara and Moscow over control of the region once American forces leave. 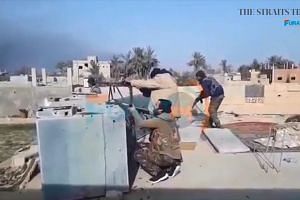 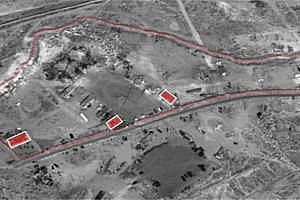 The fight for Syria's post-war order

Assad comes in from the diplomatic wilderness

Global Affairs: How the Middle East is shaping up

The US withdrawal is "among the biggest challenges ahead," Erdogan told Putin at an earlier bilateral meeting.

"Syria's territorial integrity can't be preserved if the YPG/PYD is not cleared from Manbij and east of the Euphrates," he said, referring to the Kurdish fighters near Syria's border with Turkey.

Trump renewed his pledge last week even as domestic critics have urged him to avoid a "precipitous withdrawal" that may endanger the Kurdish allies fighting against Islamic State in Syria.

Russia, Turkey and Iran, which all have forces in Syria, are waiting to see if he will follow through on the commitment.

US General Joseph Votel, who commands American forces in the Middle East, said on Feb 10 that the troop withdrawal is likely to start within "weeks."

His comments came as the Kurdish fighters began a final offensive to clear Islamic State in Iraq and Syria militants from Syria's border with Iraq.

Ankara considers the Kurdish fighters to be terrorists linked to separatists inside its territory. It wants to establish a buffer zone on the Syria-Turkey border, a plan the US supports but which Russia views as a threat to its interests in Syria.

While some Turkish troops have moved to an area near the city of Manbij, Russian officials have said repeatedly they want Syrian forces to ensure security inside the border with Turkey.

Iran understands Turkey's security concerns, though "we believe cooperation with the legal Syrian government and the establishment and presence of Syrian forces along Syria's international borders is the most sustainable way to ease these concerns," Rouhani said.

Putin proposed reviving a 1998 security treaty between Turkey and Syria at talks with Erdogan in Moscow last month, effectively pressing the Turkish leader to restore ties with the Assad regime that Ankara opposes. The treaty obliges Syria to prevent activity on its territory that jeopardises Turkish security, and allows the Turkish military to cross the border in self-defense if Damascus fails to rein in the Kurdish fighters.

While the Russian and Turkish defense ministers called for "decisive" action to secure Idlib at talks on Monday, Turkey fears a military assault could send a new wave of refugees fleeing toward its territory, where some four million already live.

Turkey has convinced the Al-Qaeda offshoot to withdraw from areas of Idlib that it took after forcing out rebels backed by Ankara, but increasing attacks by the Syrian army are threatening a fragile situation, said a senior Turkish official, speaking on condition of anonymity.

Turkey wants "to stop and postpone any military action in Idlib as much as possible to wait and see how things will unfold after the start of the US pullout," said Nihat Ali Ozcan, a strategist at the Ankara-based Economic Policy Research Foundation of Turkey.

"However, Russia is growing impatient."