BEIRUT (AFP) - Carole Ghosn, who not so long ago was an influential but discreet figure in the New York fashion world, has been thrust into the limelight by her tycoon husband Carlos' arrest and subsequent flight from Japan.

The 53-year-old second wife of the former Nissan boss, who like him also has Lebanese citizenship, has vocally led the campaign for her husband's freedom but what role she played in his epic escape remains unclear.

Carole was reunited with her husband on Monday after he jumped bail in Japan, where he had been jailed and then held under house arrest over several counts of financial misconduct.

Little known in her birth country, the elegant entrepreneur often seen sporting flowing blonde hair spent a big part of her life in the United States.

But over the past year, she has criss-crossed the globe, indefatigably spearheading a campaign to clear her husband's name.

Carole was not with him on Nov 19, 2018, when he was dramatically arrested aboard his private jet at a Japanese airport and was shocked to learn the news thousands of kilometres away.

She was prevented from seeing her husband during his detention and initially kept largely silent about his case but was ever-present after he was released on bail to a central Tokyo apartment in March 2019.

The tycoon's wife appealed to French President Emmanuel Macron, complaining in an interview with the newspaper Journal du Dimanche that the silence of French authorities on the case was "deafening".

She also contacted the White House and gave a tearful interview to US media in which she said her 65-year-old husband was in poor health, exacerbated by what she described as "mental abuse" while he was detained.

"During the month he was free, they tried to live normally, go for walks, eat good meals", said a Tokyo-based friend of the couple.

This was in spite of the photographers who camped outside their residence - to Carole's visible annoyance. 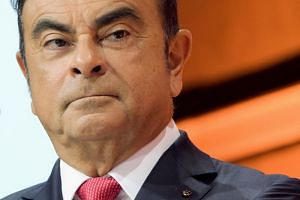 The respite was brief and Carlos was rearrested at dawn on April 4 to answer further allegations - an event that "traumatised" her, according to her friend.

In interviews she claimed that prosecutors scoured their 50 sq m apartment, searched her, took her passport and even accompanied her to the bathroom.

"It was a huge trial, among the worst moments of her life," said the couple's French lawyer, Francois Zimeray, who praised her for her "dignity" under pressure.

Using another passport, she then left Japan for France but returned a few days later to face questioning and show "she had nothing to hide."

Her friend told AFP: "She has decided to fight for her husband because she loves him and she believes in his innocence. She won't leave him because she knows that for him, his defence is the biggest challenge of his life."

Media reports gave colourful accounts of Ghosn's escape, spirited out of his home in an instrument case by a former US marine and a private security operative from a Lebanese firm posing as musicians hired for a Christmas party.

The former Nissan chairman insisted on Thursday that he had not received help from any government and had organised his escape "alone", denying reports that his wife orchestrated the daring operation.

Born in 1966 in Beirut as Carole Nahas, the businesswoman has spent most of her life in the US. She holds American nationality along with her three children from her first marriage.

Highly educated and successful in her own right, in the 2000s she founded a company selling luxury kaftans.

She met Carlos and the couple fell quickly in love, with Carole providing a calming influence on the impulsive tycoon, according to one friend.

They were married in 2016 at the gilded Versailles Palace near Paris in a lavish ceremony that has since caught the attention of authorities amid questions over how the wedding was funded.

According to sources close to the case, she is named as president of a company used to buy a luxury yacht that prosecutors suspect was purchased partly with funds diverted from Nissan.

Authorities have questioned her over the British Virgin Isles-registered company Beauty Yachts but she has not been charged and denies wrongdoing.