Ghosn was summoned to appear for questioning on Thursday, and will also be asked to give a statement over a report submitted by Lebanese lawyers that he had travelled to neighbouring Israel as head of Renault-Nissan, the National News Agency (NNA) said.

Lebanon is technically still at war with the Jewish state.

Lebanon's judiciary last week received a "red notice" from Interpol for the arrest of Ghosn after he escaped bail in Japan and reappeared in his home country at the end of December.

The 65-year-old businessman faces several counts of financial misconduct in Japan, including under-reporting financial compensation to the tune of US$85 million (S$114 million).

Lebanon does not have an extradition agreement with Japan.

The prosecutor was set to hear on Thursday Ghosn's response to accusations of "entering the enemy country and meeting a number of Israeli leaders", NNA said.

In early 2008, Ghosn travelled to Israel to announce the mass production of electric vehicles there with the cooperation of Renault-Nissan.

At a press conference in Beirut on Wednesday, Ghosn apologised to the Lebanese people for having visited the neighbouring country. 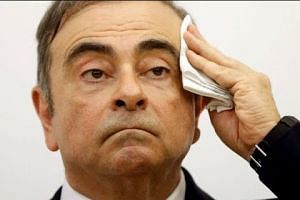 "I went as the head of Renault," he told journalists who had flown from around the world for his first public appearance in months.

"I went as a Frenchman because of a contract between Renault and an Israeli company," said Ghosn, who holds French, Lebanese and Brazilian nationalities.