ISTANBUL • Turkey's top prosecutor has laid out the most detailed description yet of how journalist Jamal Khashoggi was killed, saying Saudi agents strangled him to death almost immediately after he entered the Saudi consulate in Istanbul and then dismembered him.

But the new information on Wednesday did not address the question that has bedevilled investigators and been the subject of furious speculation: What happened to Mr Khashoggi's remains?

While Saudi officials now acknowledge that Mr Khashoggi was killed inside the consulate on Oct 2, all they have said about his body is that the assailants gave it to a "local collaborator" for disposal.

The senior Turkish official said Turkish investigators do not believe such a figure exists.

A second senior Turkish official said that Saudi Arabia's top prosecutor Saud al-Mojeb, who completed a three-day visit to Istanbul on Wednesday, did not provide the location of Mr Khashoggi's body or identify any "local collaborator". 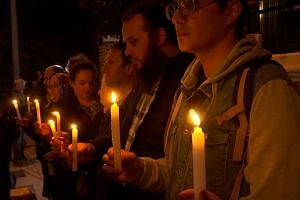 "Saudi officials seemed primarily interested in finding out what evidence the Turkish authorities had against the perpetrators," the Turkish official said.

"We did not get the impression that they were keen on genuinely cooperating with the investigation."

Turkish prosecutor Irfan Fidan said Mr Khashoggi was "strangled as soon as he entered the consulate", in line with "premeditated plans". The body "was subsequently destroyed by being dismembered, once again confirming the planning of the murder", Mr Fidan said.

Saudi Arabia has provided shifting explanations about what happened to Mr Khashoggi, a Saudi citizen, contributing columnist to The Washington Post and critic of the Saudi leadership, including the de facto ruler, Crown Prince Mohammed bin Salman.

For more than two weeks, the Saudi authorities repeatedly denied any knowledge of Mr Khashoggi's whereabouts, then abruptly changed their account, blaming the killing on agents acting outside the Saudi government's authority.

Turkey's Justice Minister Abdulhamit Gul told reporters yesterday that Turkey expected Saudi Arabia to cooperate in its investigation and there must be no cover-up. "We are looking for answers to the question of where the body is," he said.