JERUSALEM (AFP) - A bomb blast ripped through a bus in Jerusalem on Monday and sparked a fire, wounding at least 21 people, Israeli police said, in an apparent escalation in a wave of violence.

Details were still emerging, but police said a bomb had exploded on one bus in a relatively isolated area of Jerusalem, with the flames spreading to another one as well as a car.

The bombing was expected to lead to a sharp increase in security ahead of Jewish Passover celebrations beginning Friday night.

If confirmed as a Palestinian bombing, it would both reverse a decline in a wave of violence that erupted in October and mark an escalation, with most of the attacks having been stabbings.

"A professional examination of police sappers has proven that a bomb exploded on the back part of the bus, resulting in the wounding of passengers and the burning of the bus," a police statement.

"In addition, another bus and car were damaged." 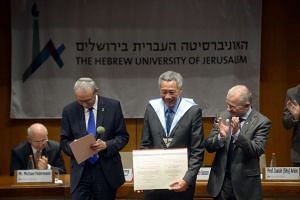 An AFP journalist at the scene said one bus was completely burnt out while another was partially burned, with a large contingent of firefighters battling to extinguish the blaze.

Police said 21 people were injured, with medics reporting at least two hurt seriously. Police were investigating whether any of the wounded were behind the bombing.

Initially police said the explosion was on an empty bus, with people on a bus and car nearby wounded by the ensuing fire, correcting later to say it was the bus with passengers that was hit by the bomb.

"We'll reach the dispatchers and those behind them. We'll settle the score with these terrorists. We're in an ongoing struggle against terror, knife terror, shooting terror, bombs, rockets and tunnel terror."

The Palestinian Islamist group Hamas, which rules the Israeli-blockaded Gaza Strip, welcomed the attack as "a natural response to Zionist crimes", but there was no claim of responsibility for the bombing.

The blast struck in an area of the city without any major buildings or homes and which is not heavily used by pedestrians.

Jerusalem Mayor Nir Barkat called on residents to be vigilant, "but continue with your plans".

"It's part of the deep understanding that if it's a terror attack, they want to deter us from our normal life, and what we must do... is go back to normal life as fast as possible," he said.

Israeli President Reuven Rivlin said that on a day "frightened citizens returning from their daily routine are being rushed to hospital - it is clear to us all, that the struggle against terrorism is ceaseless." "We will pursue and we will reach all those who wish us harm, until quiet is assured," he said in a statement.

The explosion comes with tensions high following a wave of violence that began in October that has killed 201 Palestinians and 28 Israelis.

Most of the Palestinians killed were carrying out knife, gun or car-ramming attacks, according to Israeli authorities.

The last bomb targeting a bus in Jerusalem dates back to 2011, when a British tourist was killed.

In Tel Aviv, a bomb exploded on an empty bus in 2013 in what Israeli authorities called a "terrorist" attack.

Suicide bombings were frequent during the second Palestinian intifada between 2000-2005.

Daniel Katzenstein, a first responder with the United Hatzalah medical service, said when he arrived on the scene "we saw a pile of smoke that was reminiscent of the bus bombings in the early 2000s".

"There were many people far too dangerously close to the bus when it was burning. Our first task was to get them to a safe place and to begin to treat them," he said.

Speaking before the bomb was confirmed, police spokesman Micky Rosenfeld said "if it was a terrorist attack, the implications are very great in terms of security on the ground".

Attacks have steadily declined in recent weeks, though there have been concerns the Passover holiday could lead to a new surge in violence.

Many analysts say Palestinian frustration with Israeli occupation and settlement building in the West Bank, the complete lack of progress in peace efforts and their own fractured leadership have fed the recent unrest.

Israel blames incitement by Palestinian leaders and media as a main cause of the violence.

Singapore condemns the bombing, the Ministry of Foreign Affairs said in a statement on Tuesday.

"Singapore condemns the bus bombing in Jerusalem on 18 April 2016 that has injured many innocent civilians. We wish the injured a speedy recovery," the statement said.

"We are confident that the authorities will bring those responsible for this act of terror to justice swiftly."