Indonesia yesterday joined a growing chorus of criticism led by a handful of Gulf states against the Trump administration's decision to recognise Israeli sovereignty over the occupied Golan Heights.

"This recognition is not conducive to efforts towards creating peace and regional stability," Indonesia's Ministry of Foreign Affairs said in a statement yesterday.

The statement came a day after United States President Donald Trump signed a proclamation that officially recognises the Golan Heights as part of Israel.

The signing took place on Monday in the presence of Israeli Prime Minister Benjamin Netanyahu, who was in Washington on a four-day visit.

The presidential proclamation follows a Twitter post by Mr Trump last week on the decision to stand with Israel on the issue, which quickly drew widespread anger across the Muslim world.

"After 52 years, it is time for the United States to fully recognise Israel's sovereignty over the Golan Heights," Mr Trump tweeted.

Israel seized the Golan Heights region from Syria in 1967 and annexed it in 1981 - a move that remains unrecognised internationally.

As of yesterday, American allies Bahrain, Kuwait, Qatar and Saudi Arabia had denounced Mr Trump's decision, while Syria called it "a blatant attack on its sovereignty".

Saudi Arabia said the move would have "significant negative effects on the peace process in the Middle East and the security and stability of the region". 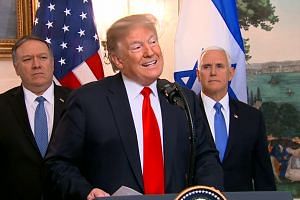 Trump signs US recognition of Israeli sovereignty over Golan Heights

The Saudi Press Agency also described Monday's proclamation by Mr Trump as a clear violation of the United Nations Charter and of international law.

UN spokesman Stephane Dujarric said the world body's policy on the Golan Heights is reflected in the relevant resolutions of the Security Council, which have not changed. The Security Council resolution adopted unanimously by the 15-member body in 1981 declared that Israel's "decision to impose its laws, jurisdiction and administration in the occupied Syrian Golan Heights is null and void and without international legal effect". It had also demanded that Israel rescind its decision.

Indonesia, home to the world's largest Muslim population, is one of the first countries in South-east Asia to condemn Mr Trump's presidential directive.

Its Foreign Ministry said Jakarta recognises the Golan Heights as an inseparable part of Syria.

Indonesia's position is also based on the principles in the UN Charter with regard to the respect for the sovereignty and territorial integrity of each country, as well as various elements contained in UN Security Council resolutions relating to the Golan Heights, such as Resolution 242 (1967), 338 (1973) and 497 (1981).

Mr Trump's decision on the Golan Heights was largely seen as a political leg-up for Mr Netanyahu, who has been facing a tough re-election campaign ahead of the April 9 polls in Israel.

Mr Netanyahu on Monday cut short his visit to Washington after a rocket attack, allegedly by the militant group Hamas, near Tel Aviv wounded seven.