ISTANBUL (DPA) - An Istanbul court on Friday (Sept 20) rejected the acquittal request of two reporters from US news agency Bloomberg standing trial over a story in 2018 about Turkey's currency crisis.

Kerim Karakaya and Fercan Yalinkilic have been accused of trying to undermine Turkey's economic stability, Bloomberg said in June when the court accepted the prosecutor's indictment.

Thirty-six others, including renowned economist Mustafa Sonmez, were charged in the same case for their social media comments on the story dated Aug 10, 2018.

The charges carry jail sentences of two to five years.

In its first hearing on Friday, the court rejected the aquittal pleas of all 38 defendants, said Reporters Without Borders (RSF), which was observing the proceedings, and Sonmez. It set the next hearing for Jan 17, 2020.

The trial "has nothing to do with economics, it's a political trial with the aim to intimidate and silence" people, Sonmez told dpa by phone.

In June, banking regulator BDDK said it filed a criminal complaint to the Istanbul prosecutor's office on Aug 14, 2018, against the Bloomberg reporters for "damaging the reputation" of banks in Turkey.

The story in question was about how the authorities were responding to Turkey's biggest currency crisis since 2001, and mentioned BDDK's talks with banks.

Sonmez described the indictment as "garbage". BDDK said it will take "necessary legal means in the future against similar publications" that could "damage the reputation of our banks and our economy" and "create an impression of weakness in our country's banking and finance system".

According to Sonmez, the BDDK complaint was initially about the Bloomberg journalists, but the prosecutor "arbitrarily" added others who commented on the story because the authorities were "dissatisfied with the criticism".

The journalists denied any wrongdoing. Sonmez said the court rejected the acquittal pleas as not everyone had presented their defence and some documents were missing.

"These absurd charges must be lifted," said media watchdog RSF as the trial started.

"We continue to fully support our two journalists, at today's hearing and in any future proceedings," said Bloomberg editor-in-chief John Micklethwait.

"They've been indicted for accurately and objectively reporting on highly newsworthy events," Mr Micklethwait added. "We are committed to them and to press freedom and hope that the judiciary will do right by acquitting them."

In April, President Recep Tayyip Erdogan criticised Western media - and singled out the Financial Times by name - for falsely reporting on the state of the country's economy.

"Western media outlets are trying to depict our country as if it has collapsed," Mr Erdogan said then. 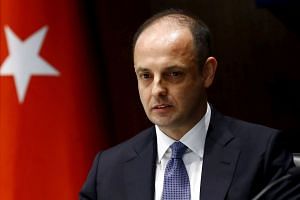 "No matter what you do, no matter what headlines you use in your newspapers, Turkey stands firm and will continue on its way, growing stronger," he continued.

The lira lost 40 per cent of its value against the dollar last year, following a trade row with the United States.

Turkey has jailed dozens of journalists and shut down several media houses since a 2016 coup attempt. The major share of broadcasters and newspapers are close to Mr Erdogan and his ruling Justice and Development Party (AKP).

"Turkey remained the world leader in jailing journalists. An estimated 175 journalists and media workers are in pretrial detention or serving sentences for terrorism offences," Human Rights Watch said in its World Report 2019.