Long processions of cars carrying people from throughout the country caused traffic jams in the city, with hundreds of small protests held at bridges and junctions nationwide.

Israel began a second nationwide lockdown on Sept 18 in a bid to bring down the world's highest coronavirus infection rate per capita.

But lawmakers blocked a government proposal that would have limited protest gatherings by ruling people could only demonstrate in groups of 20 and within a kilometre of their residence.

Netanyahu, in a video issued on Saturday night, slammed "the populist decision in parliament to cancel the limitations the government imposed after we saw the rise in the infections."

Protesters on Saturday said the government attempt to block them was one motivation they came out on the streets.

"I came here for the very reason that they tried to shoot down the protest," said Adi, a 48-year-old father of three from Tel Aviv, demonstrating outside Netanyahu's official residence.

"The people here are the last chance for Israel to be free and democratic," he told AFP. 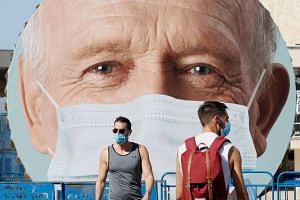 Netanyahu is on trial for bribery, fraud and breach of trust.

Israeli law does not force a prime minister to step down after being indicted.

"They shut everything down but with no economic aid," said Shoshanna, a 34-year-old woman from Jerusalem.

"So the least I can do is to come to the protest."

Israel has recorded over 225,000 infections and 1,417 deaths out of a population of nine million, with more than 8,200 new cases on Friday alone.