JERUSALEM (AFP) - The Israeli army said its tanks attacked military posts in the Gaza Strip on Saturday (Feb 8), after militants in the Palestinian enclave fired a projectile at the Jewish state.

The army said tanks "targeted two Hamas military posts in the northern Gaza Strip" in response to the projectile, in the latest round of violence in the wake of the United States unveiling its controversial peace plan.

There were no immediate reports of damage or casualties from the Israeli attack.

The projectile from Gaza had activated an alert "for open areas only," according to the army, while a spokeswoman for the regional council in Shaar Hanegev, next to northeast Gaza, said it apparently hit an open field, causing no damage or casualties.

Palestinian attacks have increased since Jan 28 when US President Donald Trump released his vision for resolving the Israeli-Palestinian conflict - a plan firmly rejected by the Palestinian leadership in both the West Bank and Gaza.

It would grant Israel a number of its long-held goals, including full control of disputed Jerusalem and a green light to annex all settlements and other parts of the West Bank.

In exchange the Palestinians would be offered a state in the remaining parts of the West Bank and Gaza.

Palestinians in Gaza, an enclave ruled by the Islamist movement Hamas, have launched rockets, mortar shells and balloons rigged with explosives at southern Israel on a near-daily basis since the plan's launch.

In the West Bank, four Palestinians have been killed in clashes with Israeli troops since Wednesday. 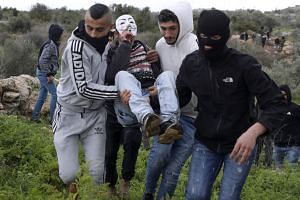 An Israeli Arab who opened fire on police near Al-Aqsa mosque in Jerusalem's Old City was shot dead on Thursday.

Over a dozen Israeli soldiers were wounded in a car ramming attack in West Jerusalem on Thursday.

Israel reinforced troops in Jerusalem, the West Bank and around Gaza ahead of the weekend.