DAMASCUS • Islamic State in Iraq and Syria (ISIS) militants have blown up the temple of Baal Shamin, one of the most important sites in Syria's ancient city of Palmyra.

The temple bombing on Sunday, confirmed by the country's antiquities chief, Professor Maamoun Abdul Karim, would be the first time the insurgents, who control swathes of Syria and Iraq and captured Palmyra in May, damaged monumental Roman-era ruins. 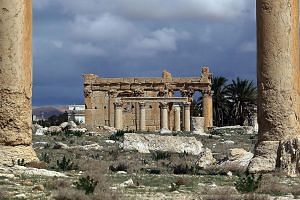 In Pictures: Heritage sites in Iraq and Syria under threat from ISIS militants

Until Sunday, most of Palmyra's famous sites had been left intact, though there were reports ISIS had mined them and the group reportedly destroyed a famous statue of a lion outside the city's museum.

"Daesh placed a large quantity of explosives in the temple of Baal Shamin today and then blew it up, causing much damage to the temple," Prof Abdul Karim said, using another name for ISIS.

"The cella (inner area of the temple) was destroyed and the columns around collapsed," he said.

Most of the pieces in the museum were evacuated by antiquities staff before ISIS arrived, though the group has blown up several historic Muslim graves.

Baal Shamin was built in AD17 and it was expanded under the reign of Roman emperor Hadrian in AD130. Known as the "Pearl of the desert", Palmyra, which means City of Palms, is a well-preserved oasis 210km north-east of Damascus.

Its name first appeared on a tablet in the 19th century BC as a stopping point for caravans travelling on the Silk Road and between the Gulf and the Mediterranean.

ISIS' version of Islam considers statues and grave markers to be idolatrous, and the group has destroyed antiquities and heritage sites in territory under its control in Syria and Iraq. In June, ISIS blew up two ancient shrines in Palmyra that were not part of its Roman-era structures but which the militants regarded as pagan and sacrilegious.

And, a week after ISIS militants beheaded Mr Khaled Asaad, an 82-year-old scholar who worked for over 50 years as head of antiquities in Palmyra, it was revealed that they mutilated his body. The militants tied his corpse to a post before hanging it in the city's ruins.

"Residents of Palmyra told me that ISIS had cut up my father's body into pieces," Mr Mohammad al-Assaad, one of Mr Asaad's sons, said at a wake held on Sunday at Damascus National Museum.

He added that despite threats from ISIS, his father had refused to leave Palmyra.

"My father used to say, 'I'll die standing up, like the palm tree of Palmyra'."

Syria's national antiquities chief Abdul Karim gave a similar account. He said: "Khaled's cousins, who also work in antiquities, told me that the group removed his body from the pole and mutilated it." REUTERS, AGENCE FRANCE-PRESSE