LONDON/GENEVA (REUTERS) - Iranian leaders vowed on Thursday (March 21) to control soaring prices, bring stability to the national currency and create jobs as the nation marked the end of a year of economic crisis fuelled by renewed United States sanctions.

Iran's Supreme Leader Ayatollah Ali Khamenei said in a new year speech that the Islamic Republic successfully resisted the US sanctions, and called on the government to boost national production to face enemy pressures.

"In the face of severe, and according to them unprecedented, sanctions from America and Europe, the Iranian people showed a strong and powerful reaction both in the field of politics and economy," Mr Khamenei said in a pre-recorded speech broadcast on state television.

Mr Khamenei said: "The main problem in the country is the economic problem... that is partly rooted in mismanagement."

"The new year is a year to boost production and create jobs for our dear young people," Mr Rouhani said.

"The new year is the year to control inflation, bring balance to the foreign currency market and expand friendship with neighbouring countries." 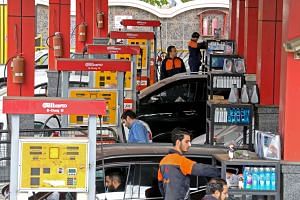 US imposes more sanctions on Iran

US sanctions on Iran are 'economic terrorism': Rouhani

EU to consider sanctions on Iran for failed attack plots

Mr Rouhani called on the country's political factions to end infighting and unite against foreign enemies.

The US reimposed sanctions on Teheran after President Donald Trump chose last May to abandon Iran's 2015 nuclear accord, negotiated with five other world powers.

Mr Trump abandoned the accord because he argued it did not address Iran's expanding regional influence and missile programme.

The sanctions have partly led to a weaker rial currency in Iran that has fed into higher inflation.

The rial was trading at 135,000 per US dollar on the unofficial market on Wednesday, according to foreign exchange websites, three times weaker than a year ago, but off record lows of about 190,000 per dollar in late September.

"We rely solely on our own people to overcome any challenges. But we also welcome constructive engagement, including with the expanding array of nations who are equally sick and tired of the bullying of the US," Mr Zarif said on his Twitter feed.

France, Germany and Britain, which remain committed to the nuclear deal, opened a new channel for non-dollar trade with Iran in January to shield business with Teheran against the US sanctions.