DUBAI (BLOOMBERG) - Iranian Foreign Minister Mohammad Javad Zarif refused to rule out military conflict in the Middle East after the US sent more troops and weapons to Saudi Arabia in response to an attack on oil fields the US has blamed on the Islamic Republic.

"I'm not confident that we can avoid a war," Mr Zarif said in an interview with CBS to be broadcast on Sunday (Sept 22) on its Face the Nation programme.

When asked to elaborate, Mr Zarif said: "That means that there won't be a limited war."

Mr Zarif was interviewed in New York, where he will attend the United Nations General Assembly session. The US said on Friday it will send a "moderate" number of troops to the Middle East and missile defence capabilities to the Saudis in response to last weekend's attack on oil facilities.

Iran's response has been a mix of defiance and an attempt to ease the tension.

President Hassan Rouhani said on Sunday the Islamic Republic would lay out a peace initiative for the region at the United Nations General Assembly that would involve a coalition of regional and foreign countries.

His overture will likely be met with scepticism in Saudi Arabia and the US, where many believe that foreign policy is driven by the hardline Revolutionary Guard Corps instead of the President and his top diplomat. 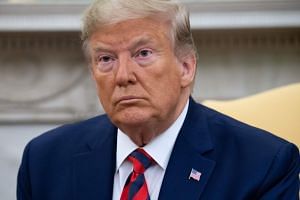 Iran says it will destroy any aggressor

US and Saudi analyses of the attack have described the strike as complex, involving a mix of low-flying drones and cruise missiles coming from the north.

The attack exposed vulnerabilities in Saudi Arabia's defence capabilities, despite the Kingdom having spent hundreds of billions of dollars on weaponry in recent years.

American officials blame Iran for the attack that knocked out half the production of oil from a key Saudi field. Houthi rebels fighting a Saudi-led coalition in Yemen took credit for the attack.

"I'm confident that Iran did not play a role," Mr Zarif said.

Anybody who "conducts an impartial investigation will reach that conclusion", he said.