BAGHDAD (AFP) - Iran and its allies were mustering a bid on Wednesday (May 16) to limit the role of fiery Shi'ite cleric Moqtada Sadr in Iraq's next government after his shock election win reshaped the country's political landscape.

The preacher, who was the bete noire of American forces during the US invasion, captured the most seats in parliament after his improbable alliance with Iraq's communists tapped popular anger over corruption and foreign interference.

But analysts said the reality of Iraq's complex political system and the sway still held by neighbouring Iran mean he faces a fight to oversee the running of a country still reeling from a brutal conflict against the Islamic State in Iraq and Syria (ISIS).

Dr Fanar Haddad, an Iraq analyst at the National University of Singapore, said it was "mathematically, legally and constitutionally" possible for Mr Sadr's rivals to form a coalition government without members of his victorious Marching Towards Reform alliance.

Mr Abadi - a consensus figure favoured by the US - had been seen as likely frontrunner after declaring victory over the extremists five months ago.

The vote - which saw record high abstentions - was a slap in the face to the widely reviled elite that has dominated Iraq since the 2003 US-led invasion that ousted Saddam Hussein. 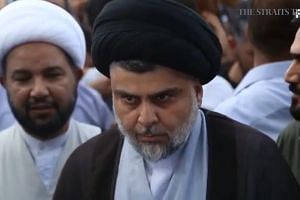 Since Monday (May 16), the powerful Iranian general Qassem Soleimani has met with several members of Iraq's old guard including Mr Abadi and his predecessor Nuri al-Maliki, several officials told AFP.

According to the officials, Gen Soleimani ruled out any alliance with Mr Sadr, who surprised many last year by visiting Iran's regional foe Saudi Arabia as Riyadh seeks increased involvement in Iraq.

Sadr rose to prominence in the wake of the US invasion, when his militia fought a bloody insurgency against American troops.

After years on the sidelines, he has reinvented himself as a champion of the poor and linked up with secularists to battle corruption.

He is one of the few Iraqi politicians opposed to both the presence of American troops and the heavy influence that neighbouring Iran exercises over Iraq.

Gen Soleimani's shuttle diplomacy is aimed at gathering enough parties opposed to Mr Sadr to deny his alliance a governable majority and a route to the powerful position of prime minister - though Mr Sadr himself is not in the running for the top job.

As well as Mr Abadi and Mr Maliki, the Iranian general met with the pro-Teheran head of the Conquest Alliance Hadi al-Ameri.

A spokesman for Mr Maliki told AFP that the former premier is looking to form a parliamentary bloc with "several major players, including the Conquest Alliance, Sunni and Shi'ite parties, and the Kurds".

Mr Sadr has already ruled out governing with either Mr Ameri or Maliki and called instead for a technocratic government that can begin to tackle Iraq's rampant corruption and the mammoth rebuilding task left from the battle against ISIS.

"Iran wants to exert pressure so that these two forces (Mr Ameri and Mr Maliki) are at the negotiating table," said analyst Haddad.

While speculation swirls, the next concrete step remains completing the vote count and firming up the final make-up of Iraq's new 329-seat parliament. Official election results are expected in the coming days.