JERUSALEM • Gaza militants fired rockets into southern Israel while Israeli aircraft carried out strikes in the Hamas-ruled territory yesterday, raising fears of a return to open conflict in the enclave.

The flare-up began early on Monday, when seven Israelis were wounded near Tel Aviv by a rocket fired from the Gaza Strip, some 120km away.

Hours later, Israel - which blamed Hamas, the dominant armed force in Gaza, for the rocket attack - carried out a wave of retaliatory strikes, wounding seven Palestinians. The military said extra soldiers and tanks had been moved to the border.

Dozens of explosions rocked the Palestinian coastal enclave and ambulance sirens echoed in the mostly empty streets. In one district, people rushed to buy bread in anticipation of an escalation in tension.

The office of Hamas chief Ismail Haniyeh was one of the initial targets hit, although he was likely to have been evacuated in advance.

A Hamas official, speaking to Agence France-Presse on condition of anonymity, denied that the group was behind the rocket attack, evoking the possibility it was caused by "bad weather".

The level of violence appeared to abate after Palestinians said Egypt had mediated a truce late on Monday. The respite did not last long, however.

The Israeli army reported late-night mortar fire and 30 new rocket launches from Gaza, on top of 30 rockets detected earlier in the evening. Some were intercepted by air defences while others hit uninhabited areas, the Israeli army said.

Israel struck around 15 fresh targets, including what the army said was a Hamas military compound, adding in a statement that it would "increase its operational activity as necessary". There were no immediate reports of casualties.

The escalation in the conflict came just two weeks before an election in which Prime Minister Benjamin Netanyahu is fighting for his political life after a decade in power, campaigning on a tough line against Palestinian militants.

Beset by corruption scandals, he faces a strong challenge from a centrist coalition led by a top general.

Mr Netanyahu cut short a visit to the United States in the wake of the initial rocket attack after meeting President Donald Trump, and was due to land in Tel Aviv yesterday.

In comments from the White House, Mr Netanyahu said "Israel is responding forcefully to this wanton aggression", while Mr Trump spoke of Israel's "right to defend itself".

"Hamas needs to know that we shall not hesitate to go in (to Gaza) and take all necessary steps," Mr Netanyahu said in remarks broadcast on Israeli public radio. He added that Israel had delivered "a very, very forceful response". 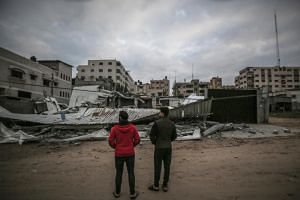 Israeli officials did not comment on whether a truce had been reached, and the country was on high alert, with schools near the border kept closed and residents instructed to stay near bomb shelters.

The military said in a statement that it remained "prepared for various scenarios".

"I told my kids that everything is going to be all right and that it will be over. We trust the government will solve the problem," Mr Eliav Vanunu, whose house in the Israeli border town of Sderot was damaged by a rocket on Monday night, said on Israel Radio.

In Gaza, some universities were shut, but public schools were open, although many families kept their children home. Palestinians picked through the rubble of destroyed buildings to search for documents.

"We don't want war, but if Israel wants it then what should we do? We ask our factions to respond," said Mr Mohammad Sayed, 40.

"But we hope Egypt reaches a deal to end this," he added.